A bright orange, battery-powered train breaks the lush green stillness of Rockhill Furnace, Pennsylvania, as it traverses track originally laid in 1876. At the helm in a bright green/yellow safety vest, Meg Richards tweaks the throttle and brakes as the two-car train passes by baseball fields, crosses streets and completes the day's test run.

Along for the ride, Henry Posner III, the chairman of Railroad Development Corporation (RDC) and an adjunct instructor at Carnegie Mellon University, sits eager to demonstrate his vision for a rail-based mass transit system in the United States. The original concept for Pop-Up Metro — a battery-powered, modular train that can be inserted onto existing infrastructure — evolved in parallel with his Department of History class, The American Railroad-Decline and Renaissance in the Era of Deregulation.

"There are more possibilities for railroads than you might think," said Posner, who together with his wife, University Trustee Anne Molloy, is also a generous benefactor of CMU. "A lot of urban areas in this country have underutilized freight lines that could also support transit service. People might not have considered these opportunities because it's been perceived as too expensive, too lengthy and too risky. With Pop-Up Metro, you can do that project quickly on a demonstration basis. You don't have to spend $100 million."

For the pilot project, Pop-Up Metro, an RDC affiliate, imported remanufactured passenger railcars from Britain to Rockhill Furnace. The cars have been retrofitted with battery technology by Vivarail, another RDC affiliate. Posner said the battery train is the only one of its kind in the Western Hemisphere and its timing is good in view of the current focus on the environment and technology. It's now using 1.8 miles of the Shade Gap Branch of the East Broad Top Railroad as a proving ground.

To bring Pop-Up Metro's working demonstration train to fruition, Posner assembled a team of Carnegie Mellon affiliates, including Richards, a School of Computer Science alumna and senior systems software engineer for the Eberly Center for Teaching Excellence and Educational Innovation. She is a teaching assistant for the railroad class and now acts as Pop-Up Metro's project manager.

"Hiring CMU students is a really good investment, because they are very good at figuring out what the problem is and solving it," Richards said. "It doesn't really matter what their background is. They're born problem solvers." 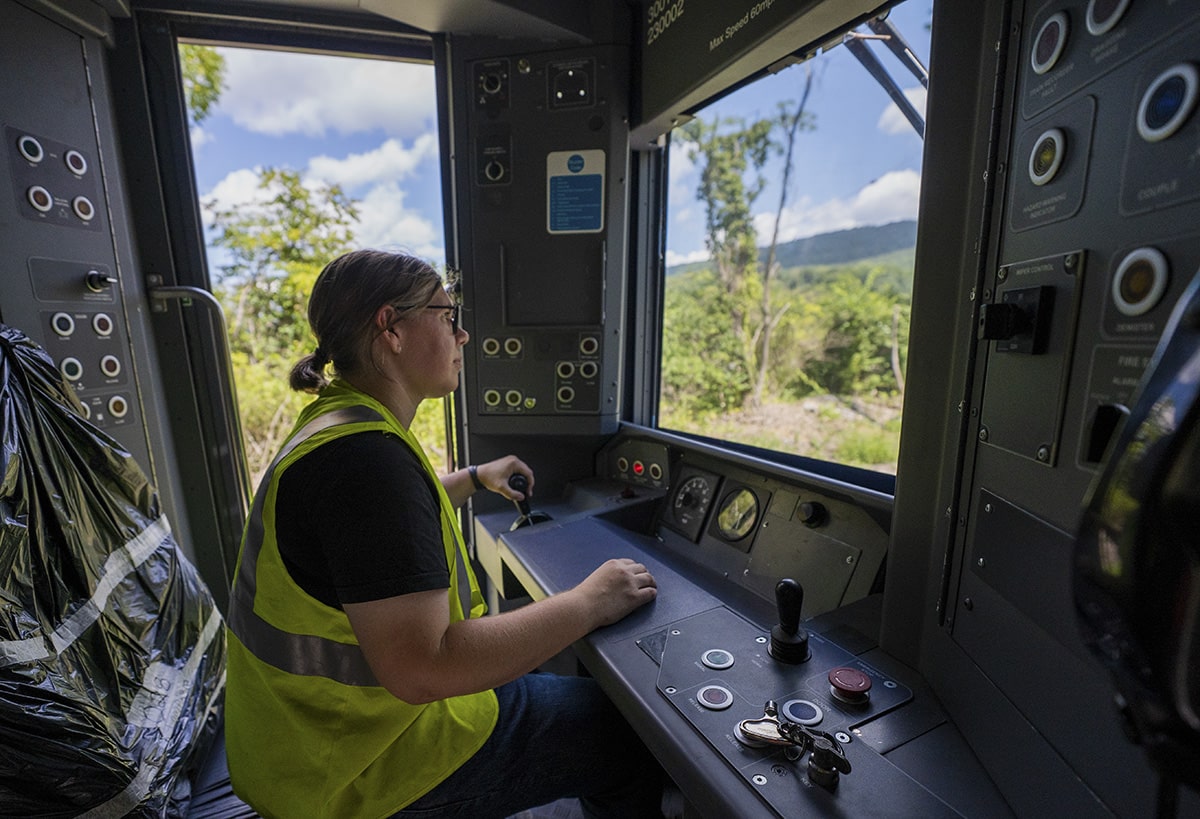 Meg Richards operates the battery train on a test run.

Posner rounded out the team with two interns he met through his class at CMU.

"The idea of my class is to expose students to the industry well before they're about to graduate and plant the kernel that this is an important industry with a future that might be different than what people have seen in the past," Posner said. He added that there are interesting opportunities in rail, particularly with the Biden administration's emphasis on infrastructure, sustainability and investment.

Shaelin Spahle graduated in May from the Bachelor of Humanities and Arts program, focusing on architecture and ethics, history and public policy. With her own undergraduate research focused on the history of the American kitchen, Spahle was drawn to Posner's class on railroad history. She found a kindred spirit in Posner, who embodied what she had envisioned for her time at CMU.

"Henry personifies the CMU mentality," Spahle said. "I choose to attend CMU specifically because I've always been that jack-of-all-trades kind of person. Henry's academic attitude was about finding all of your passions and a meaningful synthesis between them." 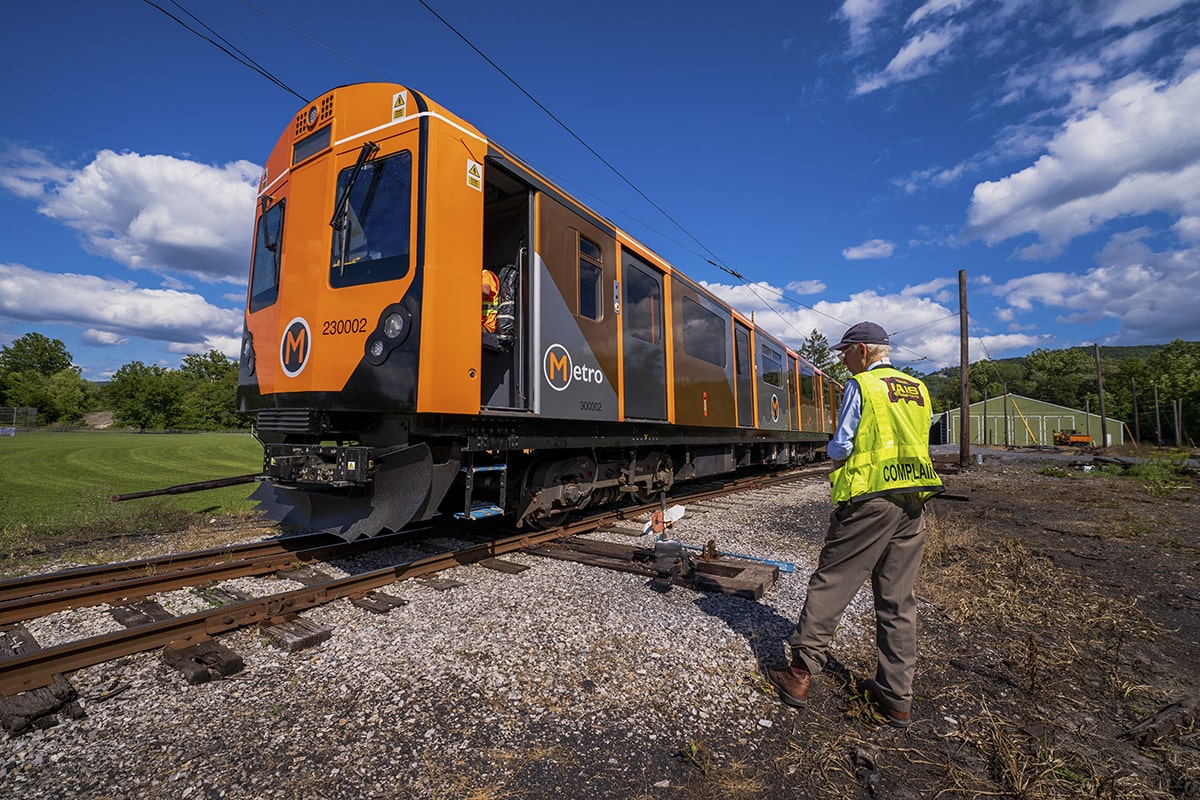 Henry Posner III survey's the battery train as it passes.

"This project has so much potential," Spahle said. "It's the first battery train in the United States. This model of sustainability and versatility hasn't been seen before, and we're still pushing it ourselves."

The Pop-Up Metro internship came at the perfect time for Owen Sahnow, a junior in the School of Drama majoring in technical direction. The coronavirus pandemic squashed Sahnow's chance to partake in traditional theater internships. Then came a well-timed phone call that took advantage of his experience in set construction.

"I gave Owen a mandate that in three weeks, I needed a high-level platform for our train that was compatible with Amtrak and New Jersey Transit. It needed to be attractive, modular so that it could be dismantled and reassembled, and compliant with the Americans with Disabilities Act," Posner said. "We didn't tell him how to do it."

Sahnow's major requires a non-drama elective each year. His own interest in trains (he volunteered at the Baltimore Streetcar Museum in high school) led him to Posner's class. He appreciated Posner's passion, knowledge and enthusiasm for transit.

"Every class starts with a safety briefing, because that's how it works in railroad industry. You start with a job briefing that includes potential risk factors," Sahnow said. "Of course, when we moved to Zoom, Henry included eye fatigue, possible pinky strain."

Posner knew that Sahnow had the enthusiasm necessary from the railroad class. He relied upon skills Sahnow was learning across CMU for the job at hand. 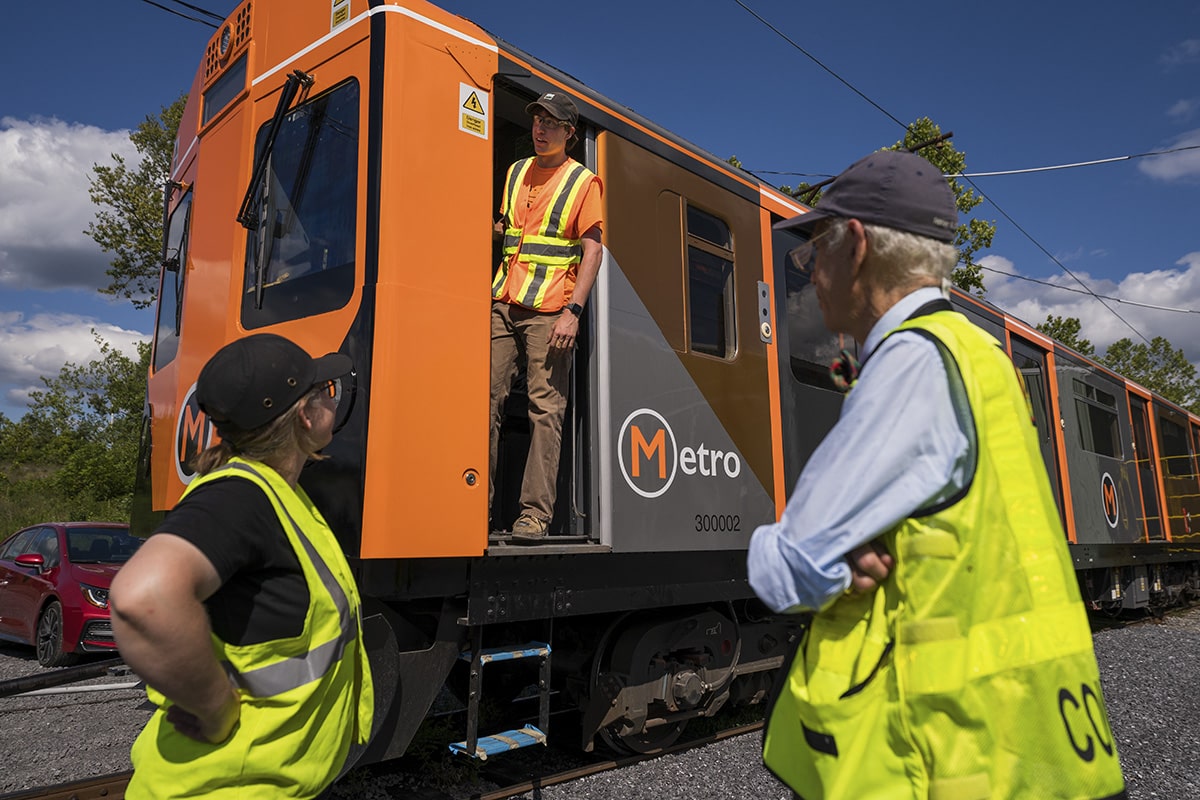 Owen Sahnow, center, leans out of the battery train to talk to Richards, left, and Posner III, right.

"I got into the work and realized it was all the same things I was learning in school," Sahnow said. "I'm budgeting. I'm figuring out how many hours it's going to take for something to happen. I'm comparing products and gaining new experience interacting with vendors."

Sahnow's internship evolved past the construction of the platform. He learned more and more about the functions of the train and became a qualified operator.

"In three weeks, I went from knowing very little about this to being able to troubleshoot a full train," Sahnow said. "Henry trusts us and lets us do what needs to be done."

Pop-Up Metro soon will be demonstrating the train to interested parties, such as public transportation systems that are considering adding rail-based options; existing services looking for the next generation of train; or private developers who may incorporate rail into projects.

"These past five years at CMU, I've been exposed to a pipeline of what I like to see as the next generation of railroad people," Posner said. "I'm blessed to be in this position. It's one thing to teach history. It's another thing to make history."