As construction on the new Tepper School building nears completion, Carnegie Mellon University’s Campus Design and Facility Development is aiming to earn the building a Gold certification from Leadership in Energy and Environmental Design.

Several factors would contribute to a LEED Gold certification, including a 120,000-gallon cistern that collects rainwater to be recycled for landscape irrigation and toilet flushing. In its evaluation criteria, LEED accounts for both the construction process as well as the environmental impact of the building’s day-to-day use.

To minimize the environmental costs of transportation, LEED includes the sources of building materials in its evaluation criteria. According to Utkarsh Ghildyal, principal project manager with Campus Design and Facility Development at CMU, LEED considers a source regional if it is within 500 miles of the construction site.

The bricks used for the building’s exterior were made on site at the Belden Brick Company in Canton, Ohio, less than 100 miles from Pittsburgh. The clay Belden used was harvested nearby in Sugarcreek, Ohio. “It’s about as local as you can get,” Ghildyal said.

Additionally, Ghildyal also reported that more than 50 percent of the wood used throughout the building has been certified by the Forest Stewardship Council, an organization committed to responsible management of the world’s forests. Certification from the council means that the harvesting process minimizes environmental, social, and economic impact. 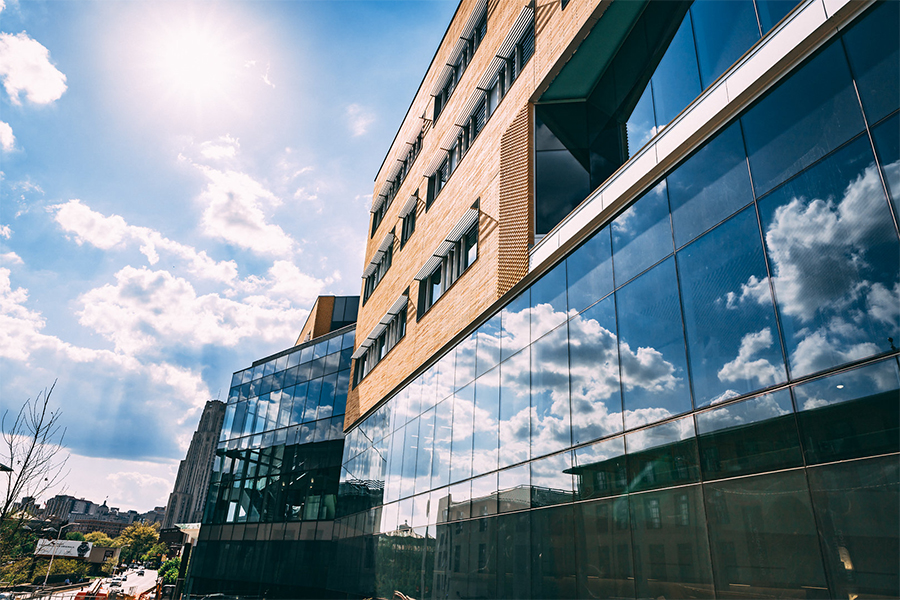 One of the early design challenges Ghildyal mentioned was that the CMU master plan limited the height of the building to a maximum of 75 feet. “With a traditional steel structure,” he said “five floors would have been about 83 feet high."

Referred to as “voided slab methodology,” this construction method involves placing hollow plastic bubbles — created from plastic discarded in kayak manufacturing — within a steel rebar structure. When concrete is poured into this framework, the bubbles displace about 25 percent of the concrete volume, resulting in a lighter, thinner slab, and reduces the building’s total carbon by 30 percent.

“We were still able to get the floor-to-ceiling heights that we wanted, but we didn’t have the inadequacies of a structural steel system, which would have made our building about 8 feet taller and not as flexible,” Ghildyal said.

Though the resulting slab weighs less, the internal support means it is stronger than a solid concrete slab, requiring fewer support pillars, or caissons, throughout the floor plan. A more open design supports a more collaborative culture and allows for more flexibility in future use of the building, Ghildyal said.

An additional benefit of the BubbleDeck design that Ghildyal reported was far fewer beams and large floor plans, which makes the building adaptable, with more opportunity to remove and add walls as needed. “The ‘Business School of the Future’ has been designed to be as flexible as possible,” he said.

Adding to the building’s flexibility is the use of a raised access floor system on the second and third stories, which places wiring and ductwork under concrete floor tiles about four square feet in area, rather than inside the walls and ceiling. If a space in the new building is being restructured for a new purpose, this means that tradespeople can pull up the concrete panels rather than breaking through walls to move cables. “If there’s a new paradigm of teaching, it would be easy to adapt to that,” Ghildyal said.

Putting heating and cooling ducts into the floor also helps to mitigate the building’s energy use, Ghildyal said. “We have some spaces that have very high ceilings, and to have ductwork for HVAC running above and pushing air down 18 to 20 feet is not as efficient as having ductwork below you pushing air up to about 7 feet. So that saves energy and makes the building much more sustainable.”

Ghildyal also noted that the floor surfaces in the atrium use radiant slabs, incorporating tubes within the concrete to circulate hot or cold liquid to temper the floors. The floor on the second level also allows for air distribution under the concrete to provide heating and cooling in areas that cannot accommodate the raised floor.

Reducing the building’s energy use is a key factor in the building’s expected LEED certification. A major challenge for the design team was mitigating the heat produced in the atrium, a large, open space bisecting the building into graduate and undergraduate wings that is encased in four stories of glass. “Our heat gain would be high with such a vast expanse of glass, and then our air conditioning would have to work overtime to negate that,” Ghildyal said.

The atrium is a significant aspect of the architects’ goal to bring as much natural light into the building as possible. With an entire curtain wall and ceiling constructed of glass, the atrium floods the center of the building with sunlight. “There are very few spaces in the building that don’t have an outside window, but they do have an interior glass curtain wall,” Ghildyal said. “Given the alignment, you’d never feel as if you’re in a landlocked space because the interior window has access to the light coming in from the skylight above."

In order to keep the cooling costs down, the atrium windows have been outfitted with fritted glass, which has been treated with a coating that helps to reduce direct sunlight, minimizing glare and decreasing heat transfer.

In addition to lower electricity use, allowing more natural light into the building also helps to improve the well-being of the building’s occupants, as access to daylight has been shown to decrease stress levels. Moreover, the wide, open staircases in the atrium and welcome center encourage building occupants to use stairs rather than elevators, which not only fosters more physical activity but also reduces the energy required to operate the elevators.