From Stars to Code: Kuixi Song

Kuixi Song’s journey to INI student began in the astronomy department at Nanjing University in China.

After one year of study, he switched his focus from stars to code and transferred to software engineering. In search of his dream career, Kuixi logged valuable undergraduate internship experiences as an analyst with Goldman Sachs mobile team and software engineer with Microsoft AI Creation group.

“Both were great experiences, but I still found that I am more of a ‘mobile’ person, which means I can build UI and features to help users do things more easily.”

“That’s why I joined LinkedIn as an iOS intern and added some features on the LinkedIn iOS app,” said Kuixi. In fact, users who have logged onto the LinkedIn app in the past few months have likely used the code he wrote. Kuixi’s interest in iOS development started in 2016, when he set a personal goal to get published in the App Store.

“After some trials and learning, I was able to publish my first app! It felt so good when I could search my name and let my friends download the app,” said Kuixi. “Since then I have published several apps, from a Japanese wordbook to a daily task management tool, plus an ‘Astronomy Picture of the Day’ client using NASA API.”

As a 2018 Apple WWDC scholar, he visited Steve Jobs Theater and met with Apple engineers to learn about Silicon Valley culture, which inspired him to apply for graduate school in the U.S. His dream career is to build something meaningful for users.

“Now, with courses I take at CMU, I think I can better put my iOS knowledge in an industry environment and try to make a career here,” he explained.

“I’ll never regret this decision of joining CMU and being part of the INI family.”

Explore OTHER stories from the 2021 Edition

On Data Privacy Day, INI students weighed in on the debate over app data and shared some advice on "owning your privacy" online. 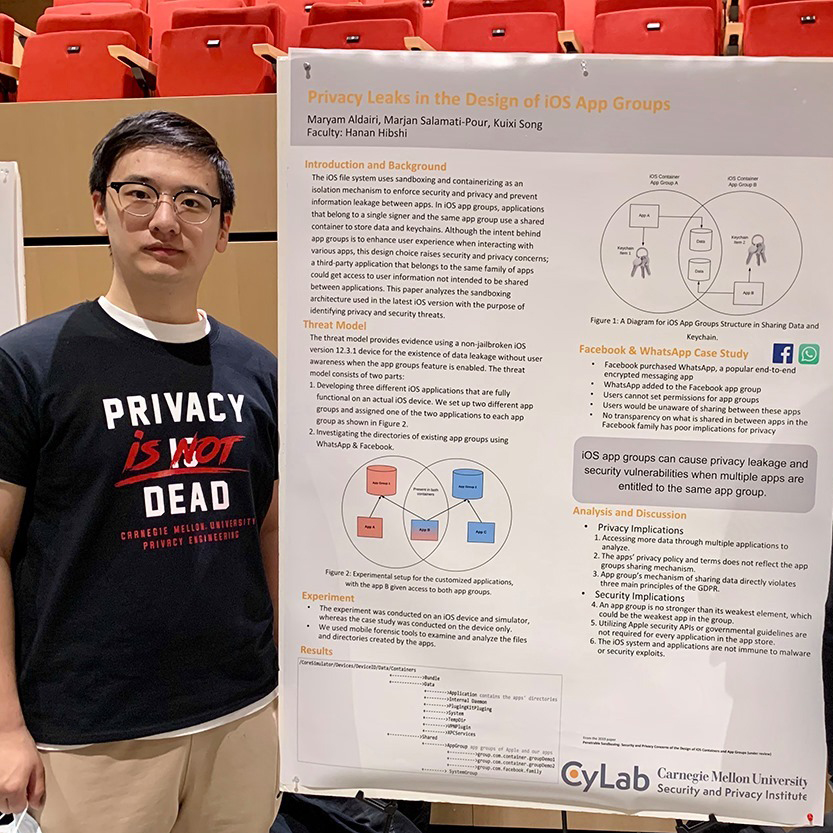 Kuixi's Favorite Courses and Why:

Brush up C skills and dig deep down into the computer system and Linux world. Write your own version of malloc and LRU cache is definitely rewarding!

Understand how Google works from high level to technical details. Write a Java search engine (almost) from scratch is much fun!

Learn Golang within a week, and build challenging projects with it - Raft, Bitcoin miner… interesting to learn how these things work!

The professor’s way of teaching is quite fun and interactive, and you can learn a lot of skills ranging from front-end to back-end, making you a potential full stack engineer!

Letter from the Director

INI Director Dr. Dena Haritos Tsamitis reflects on a year like no other and shares her thoughts on resilience and what it means to reimagine the future.

Keep Calm and Get Creative: 2020 Edition

This year was full of unexpected twists and turns. Here are some of the ways the INI community worked together and helped each other get through it all.

At the INI, we recognize that supporting anti-racism is not a question of politics or ideology, but rather humanity. We must all do our part to end racial injustice once and for all.

Each graduating class has written their own memorable chapter of the INI story. Even so, the Class of 2020 is truly an extraordinary one.

From Stars to Code: Kuixi Song

Kuixi Song’s journey to INI student began in the astronomy department at Nanjing University in China.

On the Road to Professor Schwarz Iglesias

One day, we’ll be referring to Sara Schwarz Iglesias as Professor. She is on the path to her dream career as a security researcher.

The INI is closing the gender gap in cybersecurity, one student at a time, in partnership with the Executive Women's Forum. Meet Ruchi Banerjee, EWF INI Fellow.

After meeting at orientation and finding themselves in nearly all the same courses, John Johnson and Pranay Garg quickly discovered they made a great team.

As Roseanne Silva (MS02, ‘91) moved up the ranks over the past two decades at PNC Financial Services Group, she has always remembered her Tartan roots.

With more 2,100 alumni around the world, the ALC helps foster communication and engagement among alumni, and between alumni and students. Read for 2020 highlights!

More Than A Dream: Panagiotis Zikos