Did you Love Watching Lectures from your Professors?

Online course data shows that video lectures are not the best way to learn.

Logic & Proofs: Computer-Supported Learning and the Philosophy of Mathematics

The Dietrich College of Humanities and Social Sciences

Whether in freshman seminars or in work with Ph.D. students, Wilfried Sieg’s teaching pivots on central themes of logic, mathematics and their history, but also their application in philosophical theory and scientific practice—an inexhaustible source of course content.

In November, the Simon Initiative hosted the first Simon Lunch, a new monthly event designed to bring together people across Carnegie Mellon University’s campus working in or interested in innovating education.

Researchers and volunteers from Carnegie Mellon University have joined in on the endeavor to improve learning on a global scale by working to design software that would teach children the basic skills of reading, writing and math on a tablet or mobile phone.

As part of the Global Learning XPRIZE, students and faculty have teamed up to build intelligent software to teach children basic skills.

Without a strong educational foundation, how can we expect K-12 students to be prepared for higher education? It’s an issue at the forefront for educators everywhere and one of the reasons the U.S. Secretary of Education visited Carnegie Mellon University as part of the Ready for Success Tour.

The accelerating pace of advances in bioinformatics demands new, more effective approaches to training and education for students and experienced practitioners alike. How can technology be used to meet this need?

No More Pencils, No More Books

Whether it is for travel, career opportunities or personal growth, speaking a foreign language and understanding other cultures have become incredibly valuable skills. Often though, the time and commitment necessary to fully learn a second or third language can be a challenge. Nearly two decades ago, CMU's Department of Modern Languages set out to solve this problem in higher education by offering online courses.

LaunchCMU creates crucial connections between Carnegie Mellon alumni entrepreneurs and investors, and features some of the world’s most successful startup companies. For 2015, LaunchCMU explored “The Business of Learning” and showcased transformative efforts in improving education, including initiatives for technology-enhanced learning.

Every Monday evening, the entire first-year class of the Mellon College of Science gathers for a  course that draws on the expertise of many faculty and staff across campus to help prepare students for their future as a scientist and for their lives as CMU students.

Communications of the ACM

Three years ago, Moshe Vardi published an editorial in Communications expressing concerns about the pedagogical quality of massive open online courses (MOOCs) and including the sentiment, "If I had my wish, I would wave a wand and make MOOCs disappear."

Open edX Universities Symposium Announces that Prof. Koedinger Will Be the Keynote Speaker

Open edX Symposium’s organizing committee has announced the opening keynote. It will be delivered by Kenneth Koedinger, professor of Human-Computer Interaction and Psychology at Carnegie Mellon University.

In Online Courses, Students Learn More by Doing Than by Watching

When students enroll in MOOCs, they almost always watch a series of video lectures. But just watching videos — without also engaging interactively — is an ineffective way to learn, according to a study by researchers at Carnegie Mellon University.

Learning Is Not a Spectator Sport

A recent study shows that the central approach of MOOCs — having students watch to learn — is ineffective. Instead, the emphasis on interactive activities as advocated by CMU's Simon Initiative helps students learn about six times more.

Based on PIER’s impressive track record, with respect to training students both in their core disciplines as well as in education research, the Department of Education’s Institute of Education Sciences has funded CMU’s program for the third time with a grant of $3.67 million.

New Information Is Easier To Learn When Composed of Familiar Elements

CMU psychologists, led by Professor Lynne Reder, uncover a critical relationship between working memory and the strength of information “chunks.”

When Bill Buttlar, a professor and associate dean at the University of Illinois at Urbana-Champaign, and his colleagues were charged with revamping their graduate program, they decided to attend CMU to learn how to effectively implement cognitive tutors.

Stanford’s president questions online learning and says more experimenting needs to be done like what is happening at Carnegie Mellon.

Can neuroscience solve the mystery of how students learn?

Carnegie Mellon scientists are making discoveries about how we learn.

Learning in the Real World Tops Learning From a Tablet

Despite the increasing use of technology, CMU researchers demonstrated that kids still need physical experiments to enhance their learning. Watch a video of the research in action.

The HCII will add three assistant professors to its world-class faculty in August, when Geoff Kaufman and Chinmay Kulkarni will join the community and John Stamper will transition from his systems scientist role.

CMU scientists have — for the first time — documented the formation of a newly learned concept inside the brain, which shows that it occurs in the same brain areas for everyone.

The Global Learning Council (GLC) will present its draft white paper regarding technology-enhanced learning (TEL) and the sharing of learning data to the Association of Public and Land-grant University (APLU) member presidents and chancellors on June 18, 2015. The GLC was formed in conjunction with the launch of the Simon Initiative at CMU.

The GLC released a first draft of a white paper that includes proposed recommendations regarding technology-enhanced learning (TEL) and the sharing of learning data. The paper is available for public comment and will be shared with higher education leaders over the next few months. 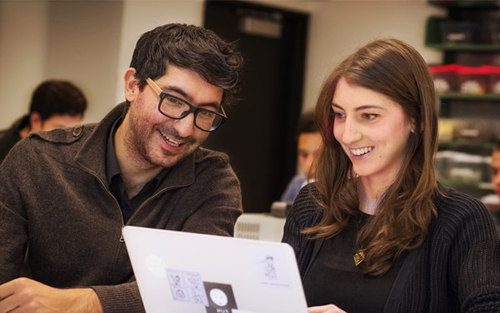 The Carnegie Corporation of New York has awarded CMU a $1 million, two-year grant, to demonstrate and help promote the use of technology-enhanced learning techniques in higher education.

When you learn a new technical concept, something happens in your brain, but exactly what has been a mystery until now. For the first time, CMU scientists have traced the brain processes that occur during the learning of technical concepts.

Freeman Hrabowski, III, president of the University of Maryland, Baltimore County, recently challenged Carnegie Mellon University to focus its goodwill, brainpower and expertise in the science of learning to understand the intricacies of race, poverty and academic excellence.

The Most Important Higher Ed Story of 2015

The days of the lower-division large enrollment course subsidizing the upper-division seminar are over.