If 2020 proved anything, what life serves up comes downcourt fast. Since he was 8, Joshua Pinckney excelled at returning what came his way — both on the tennis court and in the classroom. Last year, though, the Carnegie Mellon University graduating senior encountered a defining challenge that changed his perspective of the world.

This new way of seeing started with a mysterious pain ... in his eye.
Born in Boston and raised in Atlanta, Pinckney chose CMU after a campus visit. Academics were his priority, but he planned on playing tennis no matter where he attended.
"When I came here and approached people on campus, everyone was so welcoming and passionate about their experience and what CMU meant to them," Pinckney said. "I was already in contact with the tennis coach, and sold right away just by the campus atmosphere. At CMU I could push myself on the court and in class."
Pinckney has made the most of it. Double majoring in international relations and politics and Hispanic studies with a minor in sociology, he has played on the men's tennis team since starting at CMU. He's been honored twice as one of the top student-athletes at CMU at the Student Athlete Academic Achievement Celebration, worked as a resident assistant (RA) and a community advisor (CA), co-founded the Black and Latinx Athlete Coalition and will be inducted into the CMU chapter of the Phi Beta Kappa Society, the nation's oldest honor society. 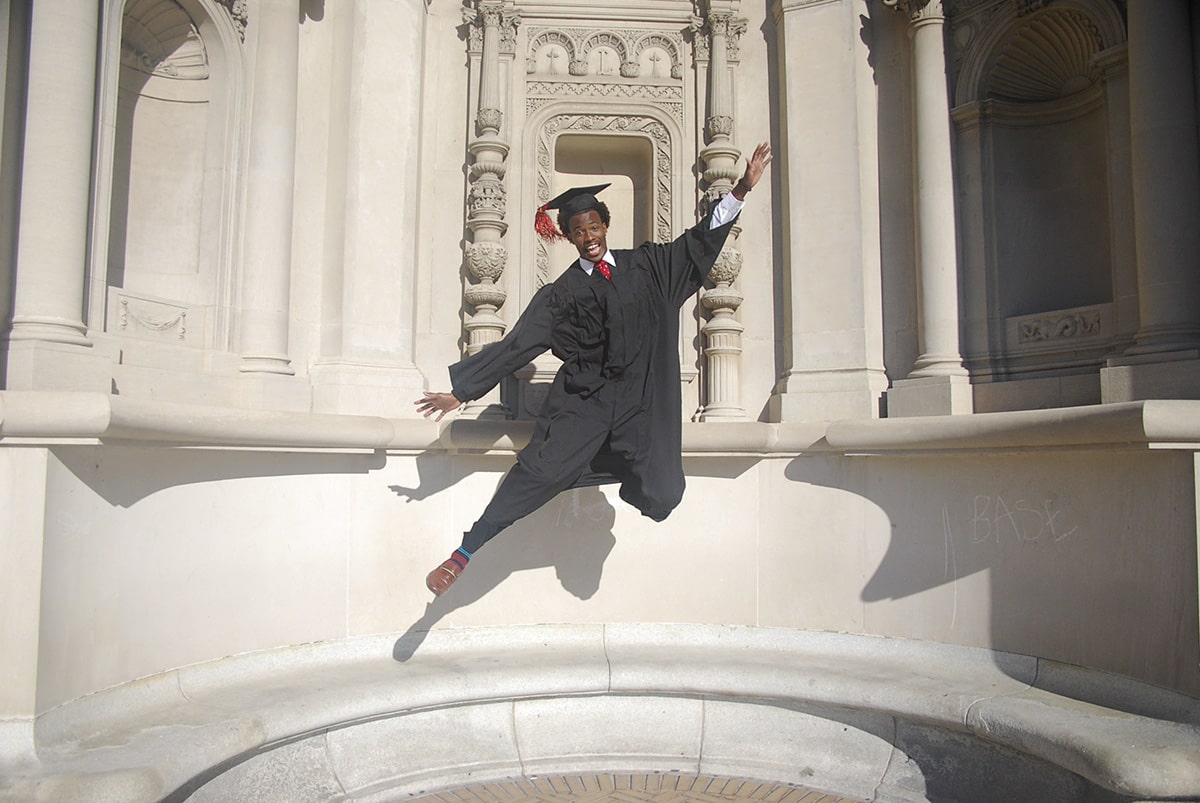 Pinckney is graduating this May.

Last summer, singles tennis was arguably the competitive sport least-affected by the coronavirus outbreak. Players remain separated, outdoors, on their own side of the court. COVID-19 wasn't the cause of the vision troubles that were plaguing Pinckney as he practiced. His inability to connect his racket to the ball led him to believe something was truly wrong. 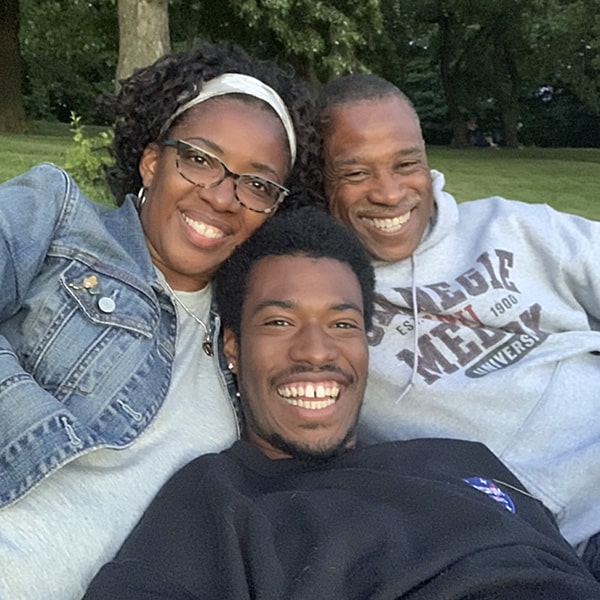 A routine eye-exam showed the troubling indication of a larger problem, and Pinckney found a normal day morph into an emergency room visit, an MRI and a life-altering diagnosis of multiple sclerosis. His parents, Claristine and Eric Pinckney Sr. (pictured at right), came to Pittsburgh immediately to be with him in the hospital. And in this trying moment, Pinckney said he felt a surprising feeling.

"We take life for granted, and this made me grateful for every day that I'm alive," Pinckney said. "We always go through life wanting more, and not appreciating what we have. My grandparents are a big part of my life. At my age, they were not afforded opportunities like these. It's because I'm grateful to be educated at a place like CMU that I'm so driven to make an impact here and leave a piece of myself and of my ancestors for those who follow."
Armed with his diagnosis, Pinckney came back to CMU, but everything looked a little different. He tried to return to playing tennis, but he'd lost significant vision in his left eye, making it difficult to track the ball. New pain and fatigue led to a realization. It was time to hang up his racket, and reevaluate his old approach to taking on responsibilities.
"Stress is the No. 1 trigger for MS, so I had to really reset my boundaries and limits — stop biting off more than I could chew," Pinckney said. "I had to realize that I wasn't a failure if I didn't contribute to all these different activities and student life. I was actually reinvesting in myself, to do those things more sustainably over time."
Rosie Cheng is CMU's coordinator of student-athlete wellness. She met Pinckney his first year, and watched him grow into a confident and passionate person. Pinckney joined the Plaidvocates, a peer health and wellness group for student athletes, his sophomore year, and continued to impress Cheng."
His ideas blossomed into some of the best initiatives the Plaidvocates took on," Cheng said. "Josh expressed to us the need for more diversity and inclusion conversations and education."
As a Plaidvocate, and in his roles as RA and CA, Pinckney has tried to spread important messages to his peers. He stressed that as society continues to diversify, humanity needs to break down the barriers of assumption and judgment.

"We have the power to change things, and even if you don't do it on a broad scale, then it's super important to do it for yourself." — Joshua Pinckney

"I talk with people about making change, not just in their own life, but in their student organizations and peer groups," Pinckney said. "We have to own that we have the power to change things, and even if you don't do it on a broad scale, then it's super important to do it for yourself."

But that work, too, needed to be put on hold to address his own well-being.
"He felt he needed to take some time to get into a better state of health. Not only physically but emotional and mentally. He'd learned from his training that he needed to take care of himself first," Cheng said. "I could see the decision was hard for Josh. He is so driven and hardworking and quitting isn't part of who he is. I'm grateful he took that time, and was able to come back to the organization, better and with more focus."
Michael Belmonte has been head men's tennis coach at CMU since 2017 and has known Pinckney through his undergraduate career.
"I've come to know Josh as one of the most insightful young people I've ever met — he is a natural-born leader," Belmonte said. "This past year, while facing a major personal health issue, he had the resolve to raise up his voice for the causes of diversity, equity and inclusion. Conversations I've had with him have been some of the most impactful of my life, and will have a lasting impact on the tennis program. It takes a special person to have the willingness and patience to ensure their perspective is fully understood. Josh is that person."
Before his diagnosis, Pinckney said he would have hoped others saw him as an empathetic person. Now, he said he's humbled by what he understands empathy to truly be.
"I was diagnosed with this somewhat rare disease, and that puts me in a position to be able to relate with a new set of communities. For every part of my identity, there's a community, whether I embrace it or not," he said. "I can understand the struggles a lot of Americans are going through with health insurance and pre-existing conditions, because I'm a part of that now. But I think the biggest part of empathy is knowing your own limits. Even having been diagnosed with MS, there are very different degrees in which the disease can impact a person. I don't know where it will go for me so even within this very niche community, my experience will be unique. I can relate to anyone, but that doesn't give me the license to represent them. It should empower me and humble me to make space for other people to share their selves, because I'm just one person."