Two Carnegie Mellon University faculty members are changing the way that proteins are made for industry through their startup BioHybrid Solutions. Krzysztof Matyjaszewski is the J.C. Warner University Professor of Natural Sciences in the Department of Chemistry, and Alan Russell is the Highmark Distinguished Career Professor of Chemical Engineering.

Both faculty members have been recognized recently for their work and research. As CEO of BioHybrid Solutions, Russell received the 2018 Innovator Award from the Pittsburgh Business Times, and Matyjaszewski recently was elected into the National Academy of Sciences. A third co-founder, Antonina Simakova, is a postdoctoral researcher in the Matyjaszewski Polymer Group. Prior to receiving her doctorate at Carnegie Mellon, she was named a 2016 Innovation Fellow by the Swartz Center for Entrepreneurship.

"Our goal is to create the next generation of protein-polymer conjugates," Russell said. "Non-technically speaking, we're trying to nano-armor proteins to make them better at what they do."

BioHybrid was created in 2016 to produce protein-based products for a range of industrial applications. Their process uses atom transfer radical polymerization (ATRP), which was first discovered by Matyjaszewski in 1995. Matyjaszewski and Russell have collaborated for years, developing their technique for creating protein-polymer conjugates for commercialization.

Proteins can be used to create injectable therapeutic treatments such as insulin and for catalyzing reactions in pharmaceutical and biofuel manufacturing. However, these proteins are required to function in environments that may hinder or prevent them from working in the desired way - insulin, for example, must be injected because it otherwise cannot survive the acidity of the stomach. 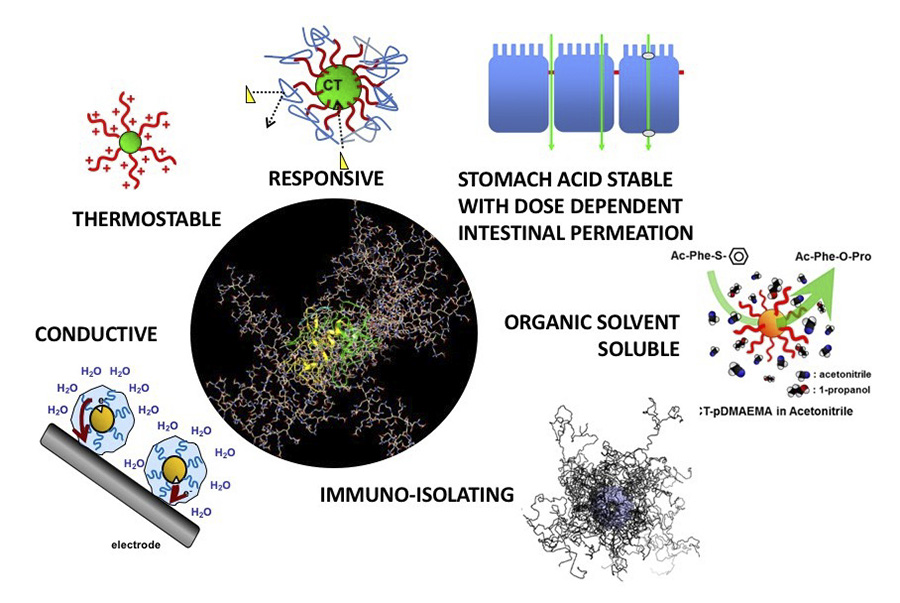 To protect protein in these hazardous environments, BioHybrid "nano-armors" proteins with polymer chains, attached via the ATRP process. Though the ability to create protein-polymer conjugates like this has existed for a long time, prior to now the process has been expensive, time-consuming and difficult to control. With Russell and Matyjaszewski's methods, the same products can be produced faster and with a much higher degree of control - at just one-tenth the cost.

"We are using techniques and catalysts that are billions of times more active than those originally used 20 years ago, allowing us to use much smaller concentrations," Matyjaszewski said. "Especially in an aqueous system, you need to tweak the polymerization conditions a little bit-like cooking, but cooking by design. It's more like molecular cuisine."

BioHybrid has secured funding from the U.S. Department of Energy (DOE) and the National Science Foundation (NSF), with plans to continue to grow and expand its business. It was among the 2016 NSF I-Corps teams at CMU. I-Corps, which was created by the National Science Foundation in 2011, provides funding for scientists and engineers to extend their focus beyond the laboratory in order to broaden the impact of select NSF-funded basic-research projects.

The team is working to secure additional grants and funding, and Russell said the company hopes to roughly triple the size of its staff within the next year. Its facility is located at the University of Pittsburgh Applied Research Center (U-PARC) right between the offices of Agentase (now FLIR Systems) and ATRP Solutions (now Pilot Chemicals), startups founded by Russell and Matyjaszewski, respectively. Both have since been successfully acquired by industry interests.

"It is an interesting twist of fate that the new company sits in a facility literally in-between the former ATRP Solutions and Agentase facilities," Russell said. "It's really nice because the existing companies can help the new company grow."

Technologies, such as polymer-based protein engineering, developed at Carnegie Mellon have the ability to enhance energy generation and the consumption of that energy in buildings, transportation, industry and homes. Some of these technologies are just emerging from the university while others have already entered, or are on the cusp of entering, the marketplace. These next-generation technologies have been developed by undergraduate and graduate students, researchers, faculty and alumni from all across Carnegie Mellon. Learn more about energy startups at CMU and the university's entrepreneurial ecosystem.