The 20th and 21st centuries have seen an explosion in the use of synthetic chemicals worldwide, including pesticides, medications and household cleaners — many of which end up in our waterways. Even in small amounts these substances can affect wildlife, plants and humans, and a number of them have shown resistance to normal water treatment methods, leaving them to build up in the environment unchecked.

In a study published this week in the journal ACS Catalysis, researchers at Carnegie Mellon University's Institute for Green Science (IGS) blazed the trail for a new field of sustainable chemistry by unveiling powerful, safe and inexpensive oxidation catalysts inspired by the biological processes within us that break down even the most stubborn micropollutants.

"It's maybe the most important paper that we've produced in 20 years," said Teresa Heinz Professor in Green Chemistry Terrence J. Collins, who directs the IGS.

Collins, who has been concerned with the harmful biological effects of synthetic chemicals since his days as an undergraduate student in New Zealand, has spent the last four decades working to develop methods to remove these chemicals from water using the process of oxidation, a process familiar to the human body.

"Oxidation chemistry is some considerable percentage of the biochemistry going on within us," Collins noted. "This is how nature deals with the problem of converting organic matter, particularly very chemically resistant organic matter, into usable material for its biochemistry or into energy to keep the organism going. Sometimes the resistance is too great for the enzymes that drive the oxidation chemistry and we have persistent compounds against which nature is powerless."

The substrate of choice for many oxidation reactions within our bodies and elsewhere in nature is hydrogen peroxide, which peroxidase enzymes activate to break down molecules from food and other substances we take in. Collins' goal since 1980 essentially has been to recreate the power and efficiency of these enzymes with artificial catalysts of his creation called tetra-amido macrocyclic ligands (TAMLs).

"We had to make the iron center of our catalysts do the same kind of chemistry as the iron center of the peroxidase enzymes," Collins said. "We spent 15 years systematically figuring out how to make the TAML catalyst composition perform properly. Then having got the first one — we spent 20 years trying to make it better."

In this new study, Collins describes the "record-setting" performances of these improved catalysts, called NewTAMLs. Testing has shown that infinitesimal amounts of these catalysts activate hydrogen peroxide to eliminate the pharmaceutical and common persistent micropollutant propranolol from water in less than five minutes.

Because of their speed and efficiency, Collins envisions NewTAMLs having major cost savings over current water treatment techniques, such as ozone purification. Even more important to him than cost and power, however, is safety. A catalyst that eliminated micropollutants would be pointless if the catalyst itself ended up causing harmful effects in living organisms.

"It's trivial to find out if something's acutely toxic — it's when something is surreptitiously toxic in parts per trillion in your body that you have a big problem," Collins explained. "Endocrine hormones in your body work in parts per trillion to low parts per billion concentrations. They control how much of life develops and what we become. The current host of everyday, everywhere chemicals that we have discovered are endocrine disruptors reads like a science fiction horror story — but it is reality."

To test the catalysts’ safety, Collins helped world leaders of endocrine disruption science to identify appropriate assays and arrange them logically to screen for low-dose adverse effects of chemicals. And TAMLs and NewTAMLs have been used for beta-testing the resulting Tiered Protocol for Endocrine Disruption. The NewTAML paper incorporates an endocrine disruption assay in mice, which the candidate catalyst passed with flying colors. 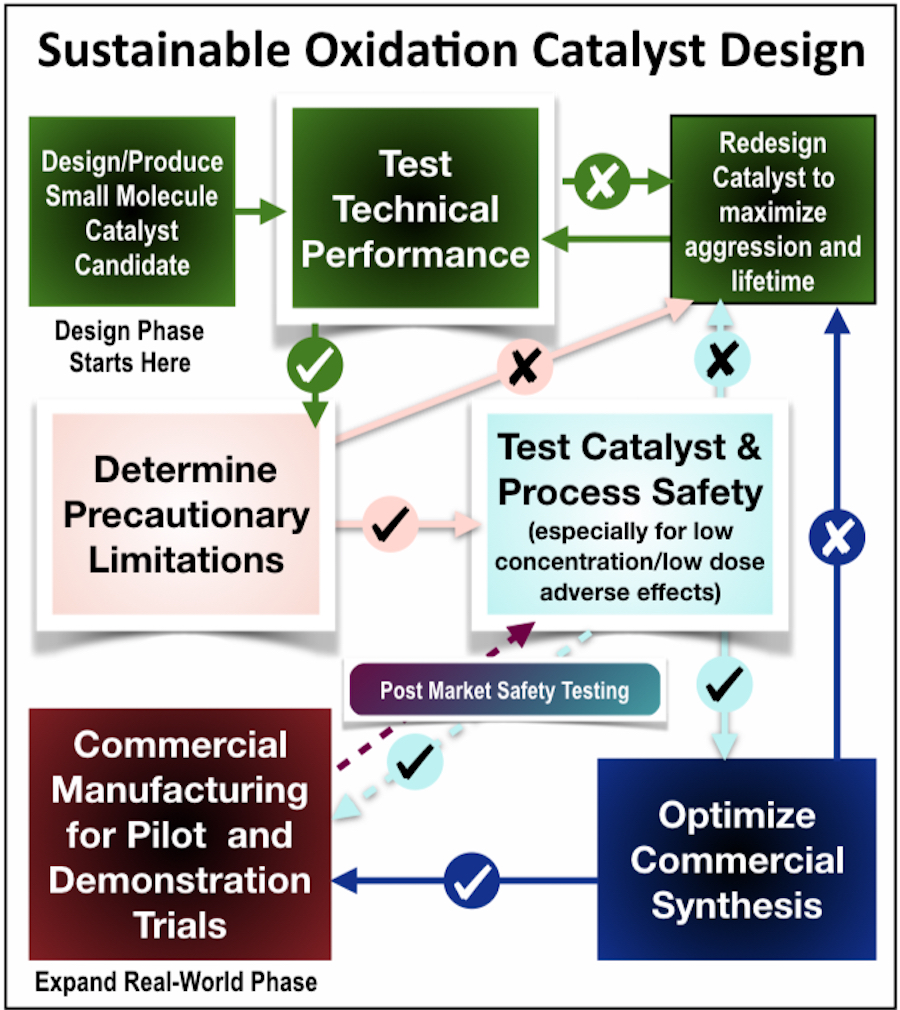 Furthermore, Collins and his team ended up rejecting potential catalyst elements that could greatly improve the performance of TAMLs because of their lack of presence in living organisms. Adding fluorine to TAMLs, for example, greatly improved their performance and stability, but fluorine is a substance rarely found in living things, and the researchers worried that building it into catalysts deployed in drinking water could increase fluoride and fluorochemical degradation products in the treated water. “There were no negative toxicity results when we tested,” said Collins. “The decision to try to reproduce fluorine’s singular and remarkable electronic properties without using it turned out to be a key reason we were rewarded with NewTAMLs.”

"The number one way to stay safe for toxicity is to build your chemical technologies from the same elements that you're made of," Collins said.

This "bioinspired" approach to chemistry is a pillar of the new field of sustainable ultradilute oxidation catalysis that Collins and the Institute for Green Science are pioneering.