CEE celebrated our alumni award winners with a reception during Spring Carnival Weekend. Four awards were presented to graduates who have make their marks in the industry.

The Recent Alumni Award, recognizing CEE alumni who have a noteworthy achievement within ten years of receiving their highest degree from the CEE Department, was given to Brittani Grant.

Grant completed both her bachelor’s and master’s degrees in 2012 and served as a residential community advisor, panhellenic president, member of the 2011 and 2012 Spring Carnival committee, and as an engineering student peer-mentor.

As an undergraduate, Grant interned with Turner Construction on the University of Princeton Plainsboro Hospital and after graduation, was hired as a Project Manager with Clark Construction. At Clark she and worked on the Smithsonian National Museum of African American History and Culture in Washington, DC. Grant has won numerous awards for her work on the museum, which opened in 2016.

During her time at Clark, Grant created a relationship between the company and CMU that’s resulted in many opportunities for students and recent alumni.

The Outstanding Alumni Service Award was presented to Janel Miller (BS'80, MS'84). The award recognizes CEE alumni who have made sustained contributions to the CEE department, the university, or the engineering profession over a period of time.

Miller earned her bachelor’s and master’s degrees at CMU before working at Alcoa in automotive R&D as an engineer and manager. She was known for her strong communication skills and after retirement, decided to take those talents into a mentorship at CEE. While she was back in the department, Miller worked with faculty members to define expectations for writing assignments in their classes. She also developed and instructed CEE’s undergraduate and graduate writing courses while coaching students on their resumes and interview skills. She and her husband, Jim, moved to Madison, Wisconsin in 2014 where she taught professional and technical communications at the University of Wisconsin-Madison.

The Millers recently established their second ACS Legacy Scholarship directed to CEE undergraduate students. “I am honored to receive the award. I never considered what I was doing to be service. I was doing what needed to be done at the time,” she said.

Sriram earned his master’s and PhD degrees at CMU and is currently the chief of the software and systems division at the Information Technology Laboratory within the National Institute of Standards and Technology (NIST). He also served in the design and process group in the manufacturing systems integration division, Manufacturing Engineering Laboratory, conducting research on standards for interoperability of computer-aided design systems. He joined the faculty at MIT and led the development of the Intelligent Engineering Systems Laboratory. Sriram co-authored or authored nearly 275 publications and conceived and developed research programs that led to important technological developments for the nation and for the engineering profession.

His work in education and in the federal government has brought honor and visibility to CMU. “I was excited to learn that I’d won the award. But my service is nothing compared to what Lt. Col. Raible or his family did for our country,” Ram said.

Rachel Reinitz was presented with the Distinguished Alumni Award which recognizes CEE alumni who have one or more major achievements that have improved the work of professional engineers or have improved people’s lives.

Reintz is an IBM Fellow, a trusted advisor to strategic clients, and is committed to nurturing technical talent. She created an internal mentoring program that has helped consultants to achieve increasing levels of professional certification. Her work inspired a new way of working at IBM–and showed companies that business transformation is an achievable goal regardless of budget, existing infrastructure, or size.

As Cloud Garage CTO and IBM Fellow, she is at the forefront of IBM’s DevOps transformation.

Congratulations to all of our award winners! 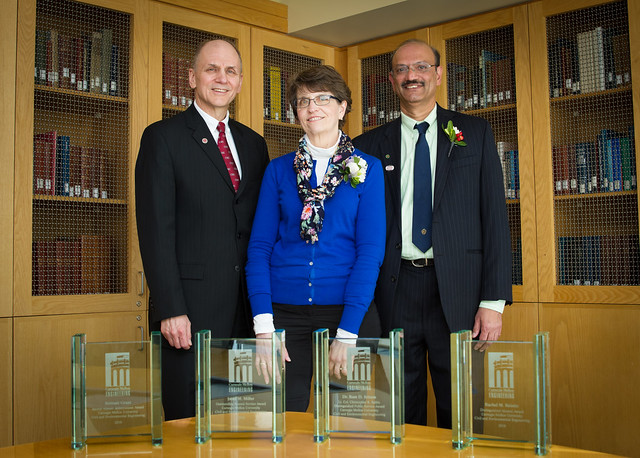