Since joining the Carnegie Mellon University community, biological sciences major Lauren Nazzaro’s passion for science is rivaled only by her excitement about fostering a love of science in young women. Her dedication as a leader and mentor have earned her an early graduation gift from the Carnegie Mellon Women's Association (CMWA). She was honored, along with six of her peers from each of the university's colleges, at the CMWA’s Spring Awards Reception with a $1,000 scholarship.

“Lauren has served as a role model to her fellow students, leading by example to inspire many young women in their academic pursuits at Carnegie Mellon,” said Becki Campanaro, assistant teaching professor of biological sciences.

Nazzaro has a knack for sharing her knowledge through teaching. She has served as a teaching assistant for junior-level biology labs. In 2016, she participated in the Summer Research Institute (SRI), an immersive research experience for rising Carnegie Mellon sophomores interested in molecular biology and biochemistry. She enjoyed the experience so much that when faced with the choice between retuning to SRI as a teaching assistant last summer or conducting her own research through a Summer Undergraduate Research Fellowship, she chose SRI.

"My experiences...taught me that I have the ability to create a positive impact on the lives of people around me."

Nazzaro also enthusiastically shares her knowledge and her love of science with young women outside of Carnegie Mellon. She spent two and a half years as a mentor and site leader for elementary aged girls as part of Carnegie Mellon’s Strong Women Strong Girls chapter. Every week, Nazzaro would go to local schools and present workshops and activities on female role models.

“My experiences in Strong Women Strong Girls taught me that I have the ability to create a positive impact on the lives of people around me,” said Nazzaro. “I was able to see young girls grow their confidence and motivation over the years that I knew them, which was a truly inspiring thing to see.”

Additionally, she returned home to New Jersey in the summer of 2017 to mentor middle-school aged girls through the JerseySTEM program.

Outside of teaching, Nazzaro has made a positive impact on her peers by being a visible role model on campus. For three years, Nazzaro has welcomed new students as an Orientation Counselor and Orientation Leader. She stood out to incoming first-year students as an accomplished, female student succeeding in her chosen field of biology.

“I have no doubt that in this capacity, Lauren inspired many young women setting them on the right foot to begin their academic pursuits at CMU,” said Campanaro.

For Nazzaro, Carnegie Mellon was a place where she could both give back to the community and learn more about herself along the way. "My time at Carnegie Mellon University has taught me a lot about how to work hard, grow as a person and become part of a community,” said Nazzaro. She hopes to take these lessons with her as she prepares to enter the medical field after graduation. 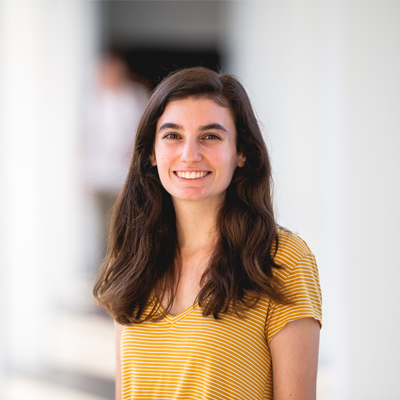 Lauren Nazzaro, 2019 recipient of the CMWA Scholarship from the Mellon College of Science