Carnegie Mellon University celebrated its 122nd Commencement on Sunday, May 19. President Farnam Jahanian told the Class of 2019 it has made the university into a stronger community.

"I want to thank you for making CMU better," Jahanian said. "Now is your time to unleash your extraordinary energy and skills on the vast opportunities ahead of you."

Tony and Grammy Award-winning actor and singer Leslie Odom, Jr. this year's keynote speaker, urged students to take that energy and use it intentionally.

"I discovered that if there has been a guiding force in my life, beyond being incredibly fortunate and blessed, it has only been intention," Odom said. "When you're starting out especially — as all of you are about to do — it falls under the purview of things over which you have complete control."

A look at this year’s commencement, with words of encouragement from keynote speaker Leslie Odom, Jr. and President Farnam Jahanian.

Odom, who earned his bachelor's degree from Carnegie Mellon's College of Fine Arts in 2003, won the 2016 Tony Award for Best Actor in a Musical for his performance as Aaron Burr in "Hamilton." He also won a Grammy as a principal soloist on the original cast recording. Odom's self-titled debut album topped the Billboard Jazz Chart in 2016. He is also the author of "Failing Up: How to Take Risks, Aim Higher, and Never Stop Learning."

Odom said much of their success will lie in how well the graduates' actions line up with their intentions and preparations.

"We are speaking to the world around us all the time. Speaking, even before we utter a sound," Odom said. "You've begun the quiet humble process already, after all. Right here. You read, and invented, and wrote, and dreamed of the world you will now endeavor to build. You've prepared and made your intentions known. May it continue from here."

Odom said that through working on "Rent" on Broadway, he met Michael McElroy, a 1990 alumnus of Carnegie Mellon who will be awarded a Tony Honor for Excellence at this year's Tony Awards.

"I came to Carnegie Mellon because I wanted to be Michael McElroy," Odom said. "Somewhere along the way I found out how to be myself. The teachers here, guided me to be myself."

Odom received an honorary Doctor of Fine Arts degree during the ceremony. 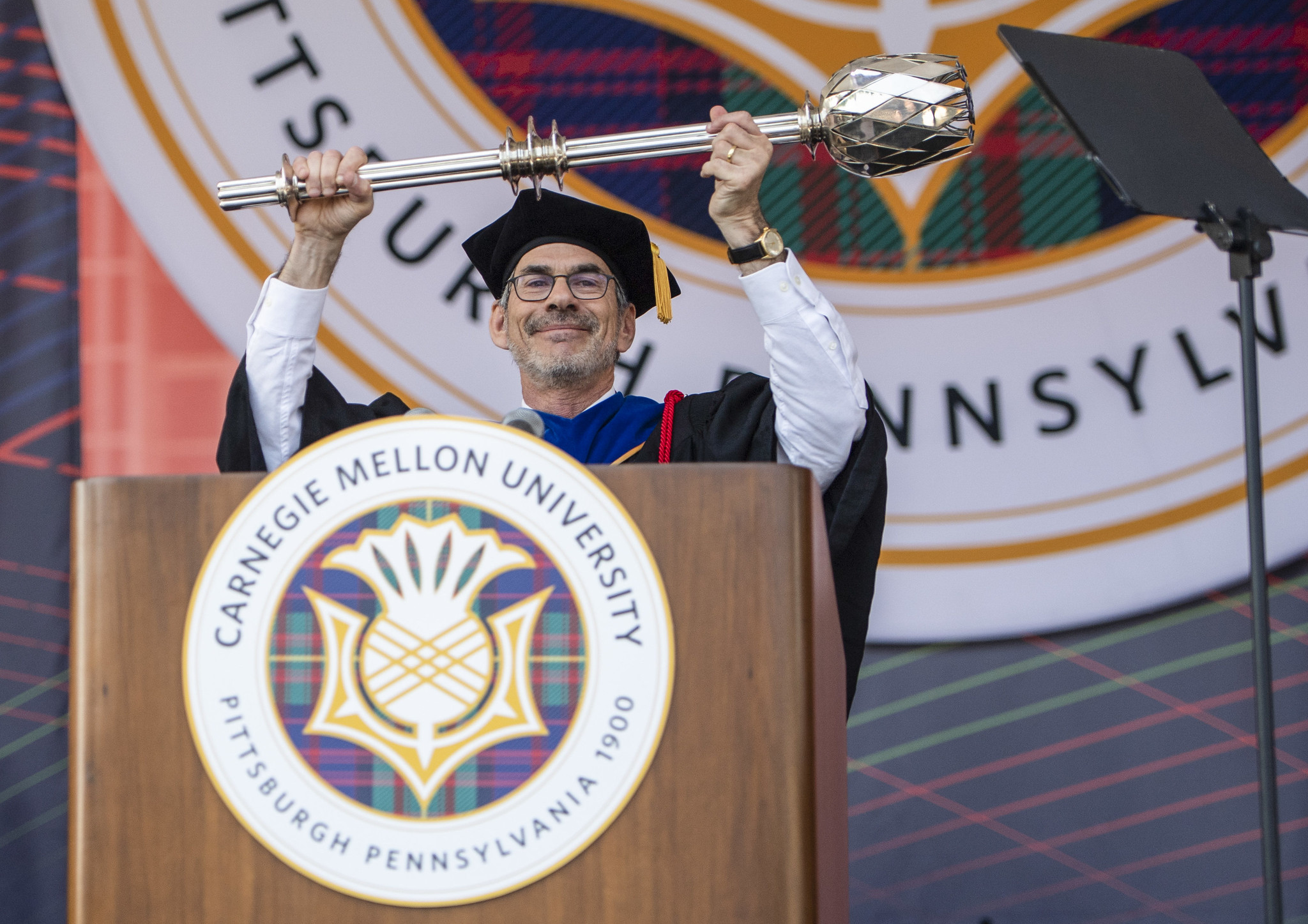 Hamza Qureshi, who graduated with a bachelor's degree in architecture with an additional major in human-computer interaction, delivered the student address. He told his classmates that during his time at Carnegie Mellon, he has seen what it means to change.

"My time here has taught me so many things. First, that drive is the greatest incubator of change. That drive and passion aren't just a part of success — they're a part of what makes us happy."

In the past four years, the university has had a new president, two new gyms and a business school. Qureshi said that the community has changed as well.

"I've seen us become more and more resilient by joining together in the face of deep turmoil and tragedy," Qureshi said. "We've become more open about the problems we're facing, and we've started working together to find ways to work past them. We've also become more proactive in driving the change we want to see for ourselves, and our people around us."

Qureshi was an active member of the student body, serving on the Undergraduate Student Senate and the School of Architecture's Student Advisory Council. He also was an orientation leader, Coulter Welcome Center Ambassador and an academic coach with Carnegie Mellon's Academic Development Department.

"My hope is that the overzealous 16-year-olds sitting at the computer researching what life is like as a CMU students are able to see it the same way I did during my time here," Qureshi said. "That they can see the same opportunities or passion, for growth, and for change."

Along with Odom, four others also received honorary degrees.

Darlene Clark Hine received an honorary Doctor of Humane Letters. She is a leading historian of the African-American experience who helped found the field of black women's history and has been one of its most prolific scholars.

David M. Kelley, a 1973 alumnus of CMU's College of Engineering, received an honorary Doctor of Science and Technology. Kelley founded the global design and innovation company IDEO and Stanford University's Hasso Plattner Institute of Design - commonly referred to as the d.school.

John Shaffner and Joe Stewart (1976 and 1977 alumni, respectively) each received an honorary Doctor of Fine Arts. The duo are among the most prolific production designers in television. They have worked on award-winning shows such as "The Big Bang Theory," "Friends" and "Two and a Half Men," and have earned 39 Emmy Award nominations and won six Emmys.