Carnegie Mellon University Trustee Frank Brunckhorst has given $10 million to the university to support its boundary-breaking initiative for the future of science. The gift will be split between two areas that will advance CMU’s visionary, multi-disciplinary research initiatives: $5 million will help build the university’s next-generation science building, which will include a new headquarters for CMU’s Neuroscience Institute, and the remaining funds will provide program support for the institute.

“Frank Brunckhorst has been one of Carnegie Mellon’s most generous and thoughtful benefactors for almost three decades. I am grateful for his wise counsel as a longtime member of the Board of Trustees and for his willingness to step forward and support our most critical priorities,” CMU President Farnam Jahanian said. “His philanthropy has provided scholarship support for hundreds of students, and now he will help us open a new frontier in cutting-edge scientific research that will unlock discoveries benefiting humanity.”

The two areas supported by Brunckhorst’s gift are at the heart of the innovative vision Carnegie Mellon is pursuing for 21st century scientific research. With his support, the Neuroscience Institute and forthcoming science building will create environments that facilitate and support partnerships among researchers from traditional scientific fields, from natural and social sciences to computer science and engineering. These new partnerships and methodologies aim to increase the pace of discovery and solve increasingly complex global problems.

“Carnegie Mellon’s scientists are at the forefront of Neuroscience research, current and envisioned, benefiting all manners of neurological health and understanding.” Brunckhorst said. “Their hearts are in their work, and their work benefits all of humanity — it’s truly inspirational. This gift will provide resources to continue and expand this research. I am thrilled and fortunate to contribute to such a transformational initiative.”

Born and raised in New York City, Brunckhorst is an alumnus of the Tepper School of Business. He serves on the board of directors and is former chairman of Boar’s Head Provisions, which is privately held by the Brunckhorst family and was founded by his grandfather.

Brunckhorst was first elected to the CMU Board of Trustees in 2005. A benefactor of the university for almost three decades, Brunckhorst has contributed nearly $29 million to various areas at Carnegie Mellon, including nearly $15 million in endowed scholarships for CMU students, and $2 million for the university’s emergency response to COVID-19, with an emphasis on supporting students in need.

“Frank’s generosity will help make possible our next-generation facility, as well as our vision to lead a revolution of 21st-century scientific research.” — Rebecca Doerge, the Glen de Vries Dean of the Mellon College of Science

“In the Neuroscience Institute, our research teams are working to answer some of the biggest questions of our time and find real-world solutions that change lives,” said Barbara Shinn-Cunningham, director of the institute. “We are grateful to Frank for his exceptional generosity, which will accelerate the institute’s collaborative work that has impacts for all of humanity.”

Substantial Neuroscience Institute activity is planned to take place in CMU’s new cutting-edge science building, to be constructed on its Pittsburgh campus. Announced in May, the $210 million facility is being designed for open collaboration and to inspire the unanticipated intersection of ideas. The facility is made possible by a $75 million lead grant from the Richard King Mellon Foundation. It will contain classrooms, teaching labs and workspaces, and modern labs that are purposefully designed to be shared. The building, part of the university’s broader future of science initiative, complements CMU’s simultaneous investment in the nation’s first cloud laboratory in an academic setting, featuring highly automated, remote-controlled robotic instruments for experimentation and data collection.

“The future of science will require physical spaces that encourage new ways of ideating, collaborating and experimenting,” said Rebecca Doerge, the Glen de Vries Dean of the Mellon College of Science. “Frank’s generosity will help make possible our next-generation facility, as well as our vision to lead a revolution of 21st-century scientific research.”

The gift is the most recent commitment to be announced as part of Make Possible: The Campaign for Carnegie Mellon University. The campaign’s supporters are accelerating the university’s ambitious strategic priorities, with a goal of raising $2 billion in private philanthropy for initiatives across its seven colleges and schools. To date, more than 52,000 supporters have contributed more than $1.74 billion. 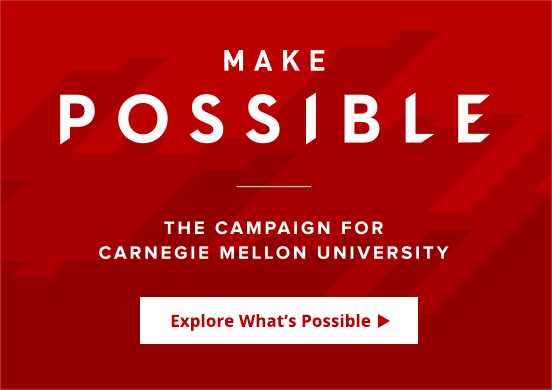 The gift is the latest commitment to be announced as part of Make Possible: The Campaign for Carnegie Mellon University. The multiyear effort aims to raise $2 billion in private philanthropy to support CMU's strategic priorities across the university and its seven colleges and schools.

The Future of Science is Here