Routine Hits From Playing Football Cause Damage to the Brain

New research led by Carnegie Mellon University and the University of Rochester Medical Center indicates that concussions aren't the sole cause of damage to the brain in contact sports. A study of college football players found that typical hits sustained from playing just one season cause structural changes to the brain.

The researchers studied 38 University of Rochester players, putting accelerometers — devices that measures accelerative force — in their helmets for every practice and game. The players' brains were scanned in an MRI machine before and after a season of play.

While only two players suffered clinically diagnosed concussions during the time they were followed in the study, the comparison of the post- and pre-season MRIs showed greater than two-thirds of the players experienced a decrease in the structural integrity of their brain. Specifically, the researchers found reduced white matter integrity in the midbrain after the season compared to before the season. Furthermore, and indicating the injury was specifically related to playing football, the researchers found the amount of white matter damage was correlated with the number of hits to the head players sustained.

The study is published in the journal Science Advances.

"Public perception is that the big hits are the only ones that matter. It's what people talk about and what we often see being replayed on TV," said senior study author Brad Mahon, an associate professor of psychology at Carnegie Mellon and scientific director of the Program for Translational Brain Mapping at the University of Rochester. "The big hits are definitely bad, but with the focus on the big hits, the public is missing what's likely causing the long-term damage in players' brains. It's not just the concussions. It's everyday hits, too."

Using sensors in helmets and MRI scans of college football players, Carnegie Mellon University and University of Rochester Medical Center researchers have found that routine hits to the head sustained during just one season can cause damage to the brain.

The midbrain, located in the center of the head and just beneath the cerebral cortex, is part of a larger stalk-like rigid structure that includes the brain stem and the thalamus. The relative rigidity of the midbrain means it absorbs forces differently than surrounding softer tissues, making it biomechanically susceptible to the forces caused by head hits. The midbrain supports functions like eye movements, which are impacted by concussions and hits to the head. While head hits are known to affect many parts of the brain simultaneously, the researchers decided to focus the study on the midbrain, hypothesizing that this structure would be the "canary in the coal mine" for sub-concussive hits.

"We hypothesized and found that the midbrain is a key structure that can serve as an index of injury in both clinically defined concussions and repetitive head hits," said Adnan Hirad, an M.D./Ph.D. candidate at the University of Rochester's Medical Scientist Training Program and lead author of the study. "What we cataloged in our study are things that can't be observed simply by looking at or behaviorally testing a player, on or off the field. These are 'clinically silent' brain injuries."

Each player in the study received an MRI scan within two weeks of the start of each season and within one week at the end. The helmet accelerometers measured linear and rotational acceleration during all practices and games, recording all contact that produced forces of 10 gs or greater. Astronauts on the space shuttle experienced 3 gs during lift-off. Race car drivers feel the effects of 6 gs, and car crashes can produce brief forces of more than 100 gs.

The 38 NCAA Division III players experienced nearly 20,000 hits across all practices and games. Of those hits, the median force was around 25 gs, with half of the hits exceeding that amount. Only two of the nearly 20,000 hits resulted in concussions.

"We measured the linear acceleration, rotational acceleration and direction of impact of every hit the players sustained. This allowed us to create a three-dimensional map of all of the forces their brains sustained," Hirad said. 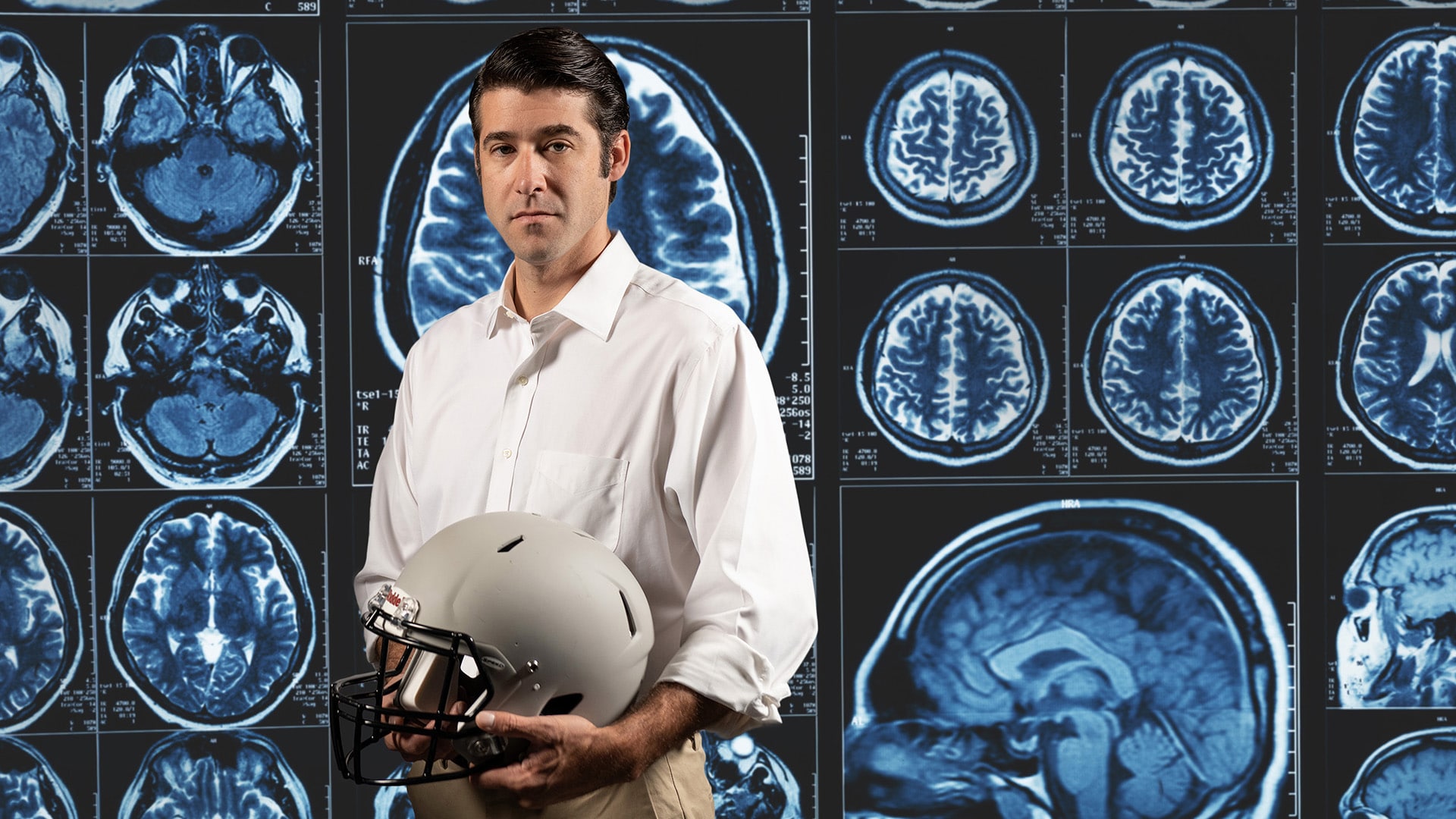 "This study suggests that midbrain imaging using diffusion MRI might be a way in the future to diagnose injury from a single concussive head hit and/or from repetitive sub-concussive head hits," said Dr. Jeffrey Bazarian, professor of Emergency Medicine, Neurology, Neurosurgery and Public Health Sciences at the University of Rochester Medical Center and a co-author of the study.

The second part of the study served as an independent means to validate the researchers' approach to the football cohort. This group included 29 athletes from various other contact sports who had a clinically defined concussion and 58 who didn't.

"Tau is an important marker of acute changes in the brain and is thought to be, in the long term, implicated in neurodegenerative diseases like chronic traumatic encephalopathy, also known as CTE," Hirad said. 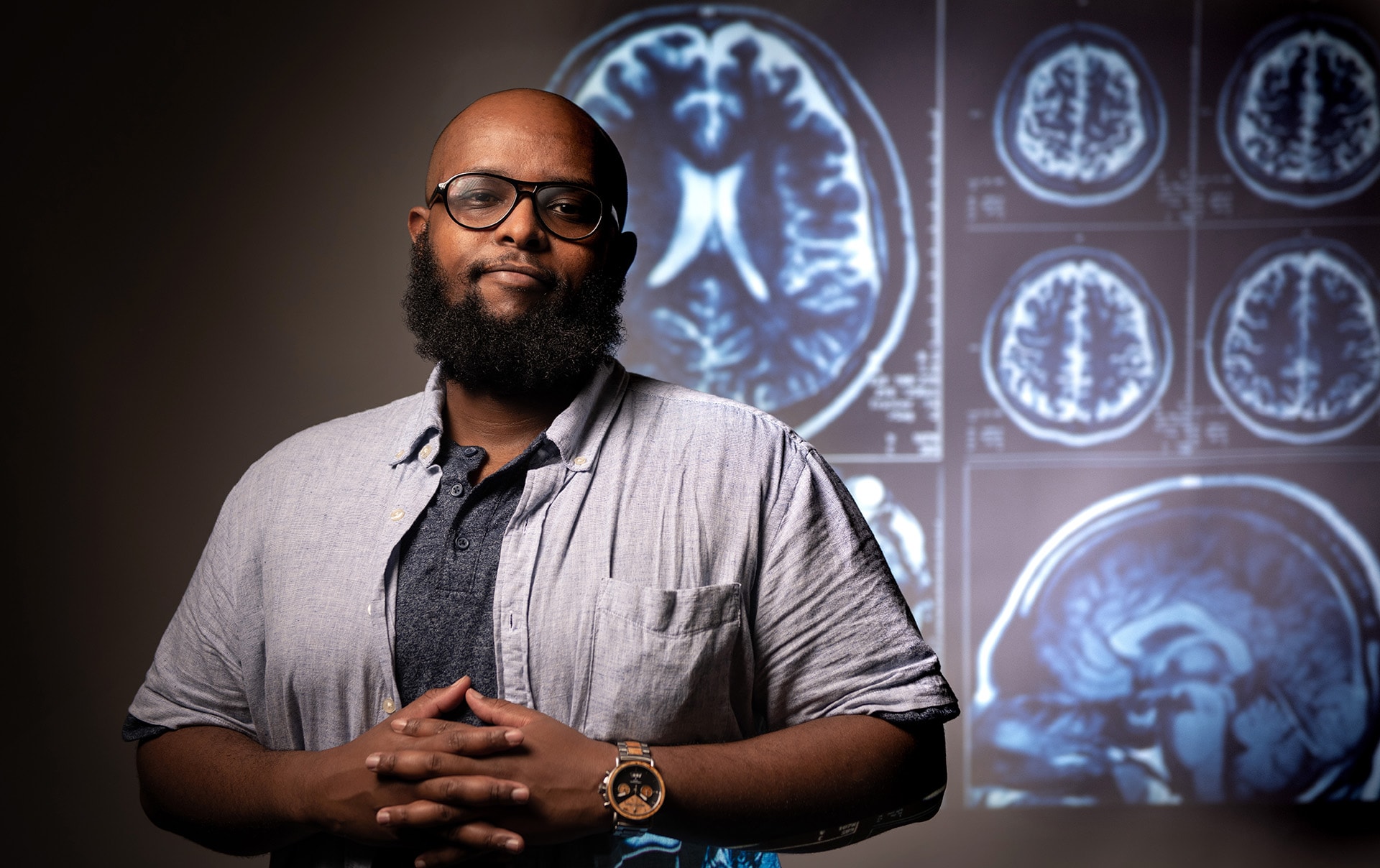 Given this new insight on repetitive head hits, what should we do?

"Our research, in the context of prior research over the past several years, is beginning to indicate that the accumulation of many sub-concussive hits is instrumental in driving long-term damage in football players' brains," Mahon said. "Future research will be required in order to translate our findings into concrete directives that are relevant to public health. An important direction for future research will be to carry out larger-scale longitudinal studies of contact sports athletes in various ages groups."

"We also need to re-evaluate how we make return-to-play decisions," Hirad said. "Right now, those decisions are made based on whether or not a player is exhibiting symptoms of a concussion like dizziness or loss of consciousness. Even without a concussion, the hits players are taking in practice and games appear to cause brain damage over time."

This study is part of the newly launched Open Brain Project, a digital platform for exploration of the human brain and how it responds to and recovers from injury. Visitors to the site can explore models of the head hits sustained by football players in this study, and researchers can contribute their own datasets and post publications and commentary on a variety of topics covering brain tumor, epilepsy, stroke and traumatic brain injury.

This study was supported by grants from the NFL Charities and National Institutes of Health (K24 HD-64754, ROI MH099921, R21 NS076176, R01 NS089609, R01 EY028535 and R01MH118257). Additional funding was received by the U.S Army Rapid Innovation Fund and University of Rochester. Any opinions, findings and conclusions or recommendations expressed in this material are those of the authors and do not necessarily reflect the views of the sponsoring agencies.