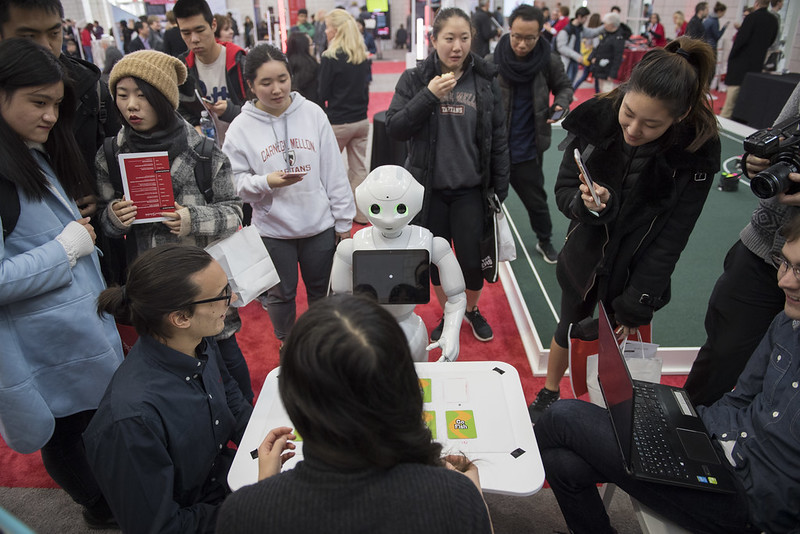 Members of the university community honored a half-century of achievements and got a glimpse at the future as they walked through the Founders Exposition and Student Exhibit, and took part in other signature events of Carnegie Mellon University's 50th Anniversary Celebration at Homecoming, Nov. 10-11.

"I often wonder how the students and faculty who were at the founding of the Carnegie Institute of Technology or the Mellon Institute would react to the Carnegie Mellon of today," said Interim President Farnam Jahanian at the Founders Convocation on Friday evening. "I bet it would feel quite different to them at first. But beneath the surface, what fueled our origin still remains part of our DNA. Every day, we continue to fulfill the aspirations of those early years and build the foundation for our next round of breakthrough moments."

The Founders Exposition in the Cohon Center's Wiegand Gym, the centerpiece of the "For the Founders" celebration, showcased the breakthrough research of more than 100 faculty members in six themes — Expanding Spheres of Science, Enhancing Human Capacities, Protecting the Planet and Society, Intersection of the Digital and Physical, and Autonomy and Unbounded Expression. The interactive and informative exhibits covered the vast array of disciplines at CMU. Attendees played Go Fish with a robot, listened to excerpts of an original opera about the lives of enslaved Africans who worked the Lowcountry rice fields, tested the strength of their passwords, watched a piece of paper fold itself, explored the progress made in the fight against Alzheimer's and more.

"The story of the 50 years since the merger of Carnegie Institute of Technology and the Mellon Institute in 1967 is a story about people and what they have achieved," said Scott Mory, vice president for Advancement and 50th Anniversary Steering Committee member. "These events have crosscutting and interdisciplinary themes addressing the opportunities and challenges facing humanity, and showcase how CMU is leading the thinking in these areas."

"It feels like the bar is raised very high for me," said Kwakye, who attended the expo with her friend, Dietrich College sophomore Aaron Lebel.

A related exhibition of ideas and projects from 30 undergraduate and graduate students featured the ingenuity and creativity of CMU students across the colleges who are envisioning and aiming to transform the future.

The faculty-judged competition included three categories: I Built Something; I Impacted Something; and I Dreamed Something. The winner in the I Dreamed Something category was "Female-centric Video Games" by Carley Johnson, a sophomore in the College of Fine Arts. "Pitcairn Robotics and Engineering Program" by Antonio Garcia-Smith, a sophomore in the College of Engineering, won in the I Impacted Something category. "Ugly Duckling" by School of Computer Science first-year students Tiffany Yu and Pranav Kumar and Dietrich College freshman James Wang was selected as the winner in the I Built Something division. The People's Choice winner was Maitreyee Joshi, a senior computer science major, for "Retinal Prosthetics: Restoring Sight to the Blind."

Friday classes were canceled to allow students to enjoy the expo as well as the additional 50th Anniversary celebration events, such as panel discussions on "The Future of Work: Technologies and their Societal Impact," "Founding Lessons" with CMU alumni, "Trailblazers: Advancing Women @ CMU" and "The A.I. Initiative."

Former U.S. Secretary of Transportation Anthony Foxx discussed "smart cities" during his featured lecture. "It's really critical we think about the society we want to create and embed that into the system," he said.

Friday evening culminated with the Founders Convocation, which opened with a rousing recitation of what makes a founder and moving remembrances from faculty members who joined the university around the time of the merger, including Egon Balas, professor of industrial administration and applied mathematics; Marilyn Taft Thomas, professor of music; and Raj Reddy, the Moza Bint Nasser University Professor of Computer Science and Robotics in the School of Computer Science. Interim President Jahanian and James E. Rohr, chairman of CMU's Board of Trustees, also spoke.

Pulitzer Prize-winning journalist Thomas Friedman of The New York Times delivered Friday's keynote address and discussed the importance of understanding the speed of changes in today's world. At a reception attendees listened to jazz music provided by CMU students in the Founders Exposition, and networked with fellow CMU alumni, students, faculty, staff and guests.