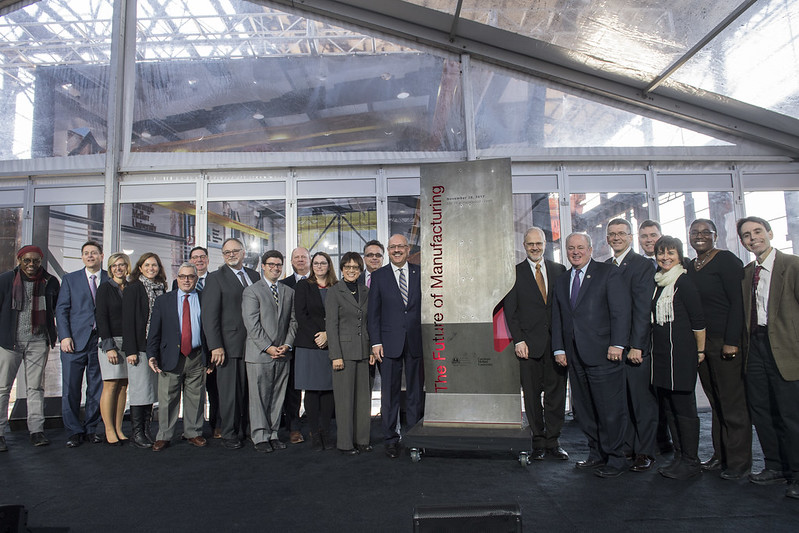 As the sun shone through the beams of an iconic, abandoned steel mill Monday, more than 250 dignitaries from business, government and Carnegie Mellon University came together to bring a new day to American manufacturing.

Through the visionary leadership of area foundations and the innovation expertise of Carnegie Mellon, the shuttered Jones & Laughlin Steel Company's Mill 19 will be the site of a one-of-a-kind hub for advanced manufacturing — a collaboration among researchers, the U.S. Defense Department and companies from across the region.

The innovations developed there from new technologies, such as robotics, 3-D printing and machine learning, promise to return America to the vanguard of global manufacturing, and empower American workers.

"The technologies that emerge from this building will have the power to make things in a whole new way, to trigger a significant resurgence of a major economic sector in the United States, and to assert our global leadership in advanced manufacturing," Jahanian said.

"By bringing together large-scale academic research and industrial development under one roof, Mill 19 will become a true differentiator for Pittsburgh and for the region," he added. "When complete, it will be the first manufacturing hub of its kind in the nation — in the world, for that matter."

As part of an agreement between Carnegie Mellon and the nonprofit Regional Industrial Development Corporation, the university has agreed to a lease of two floors of the 94,000-square-foot building that will be built within the skeleton of Mill 19.

CMU will use the space to house the Advanced Robotics for Manufacturing (ARM) Institute and the Manufacturing Futures Initiative (MFI).

ARM, initially founded at Carnegie Mellon and now operating as an independent nonprofit, won an $80 million grant from the U.S. Department of Defense in January to create an ecosystem that will speed the movement of industrial robotics technologies into commercial use, while ensuring American workers can get the training needed throughout their careers to benefit from advanced technologies and compete with manufacturing abroad.

“You see this incredible facility which will allow for so much opportunity.” Heidi Shyu #hazelwoodgreen

It will operate as part of the national Manufacturing USA network, and be supported by an additional $173 million in commitments from more than 100 members and other partners in industry, academia, government and the nonprofit sector.

"Robotics is key to U.S. competiveness in manufacturing, and one of the major factors in the economic prosperity of the United States," said Tracy Frost, director of manufacturing institutes for the Department of Defense.

"ARM, as the youngest member of the DOD-led manufacturing institutes, will work to enable smart, perceptive, collaborative robots, which can perform multiple tasks efficiently with great precision and be quickly repurposed at a cost which will make them accessible to small and medium-sized business," Frost added. "ARM is also developing a robust education and workforce training program to prepare the next generation of American workers for participation in the future workforce."

MFI, launched at Carnegie Mellon in early 2017, seeks to advance manufacturing capabilities and accelerate workforce and economic development by expediting the adoption of new technologies through interdisciplinary research.

U.S. Rep. Mike Doyle reflected on how Hazelwood Green would build upon the nation's powerful legacy of steelmaking — a legacy that benefited his own family and millions of other Americans.

"Jobs at mills like this helped shaped the American dream and created the modern American middle class," Doyle said. "In their heyday, Pittsburgh steel and Pittsburgh steelworkers were the envy of the world. Today's groundbreaking is a sign that a new heyday is coming for Pittsburgh and for America — one that will transform and revive an entire sector of the American economy in every corner of our great nation."

The site was first developed as a steel mill in 1884 by the Jones & Laughlin Steel Company — the most determined regional competitor to the Carnegie Steel Company made famous by CMU founder Andrew Carnegie. The mill operated under many names over the years — lastly the LTV Coke Works — and has sat dormant since 1998.

Since then, three foundations have worked diligently to return industrial vitality to the site. The Heinz Endowments, Richard King Mellon Foundation and Claude Worthington Benedum Foundation joined forces in 2002 to purchase the property and have led efforts to clean the brownfield site and seek new development opportunities.

Rebranding the property as Hazelwood Green in October, the foundations brought the Hazelwood community, along with local, state and federal government stakeholders together to realize a vision for the property that will create opportunity, while promoting diversity and economic sustainability.

"This site is envisioned as a place where people will thrive, ideas will be forged, and this entire ecological condition of the site will be regenerated over time," said Hazelwood Green Project Director Rebecca Flora.

A $20 million gift from the Richard King Mellon Foundation to Carnegie Mellon helped catalyze the ARM Institute, support the new facility at Mill 19 and launch the MFI.

Hazelwood Green also is deeply rooted in neighborhood redevelopment. By focusing on Pittsburgh's largest undeveloped property and its adjoining neighborhood, and incorporating extensive and ongoing engagement with local stakeholders, Hazelwood Green aims to benefit area residents along with American manufacturing.

A key component of the Hazelwood Green effort will be to make the development a center for workforce training and education to empower American workers to be more competitive in the global manufacturing marketplace. The effort also aims to further Pittsburgh's resurgence as a global innovation leader.

"We are here today because government — federal, state and local — recognize the potential of this site, of the region, and of these partners to usher in this game-changing manufacturing renaissance," said Dennis Davin, Pennsylvania Secretary of Community and Economic Development.

"With the cooperation and coordination of our industry partners and Carnegie Mellon, which is truly one of Pennsylvania's greatest assets and a global pillar of research and development, our investment will help transform an entire sector of the economy, not just for Pennsylvania, but for the country," Davin added.

Added Don Smith Jr., president of the Regional Industrial Development Corporation: "When they roll the opening credits of Monday Night Football, this is the building they're going to show to show what Pittsburgh's all about. It's building on our past of steel, but it's showcasing our future of technology and manufacturing."

Watch: Highlights from the groundbreaking event.

Watch: The Future of Manufacturing

Learn About The Hazelwood Community

Future of Manufacturing To Rise Within Abandoned Steel Mill