A cure for Alzheimer’s is taking longer than expected; here’s why

Media Inquiries
Ryan Noone
In her latest research paper, published in the Journal of Molecular NeuroscienceOpens in new window, Anne Robinson, Head of Carnegie Mellon's Department of Chemical Engineering, explains why understanding the progression of neurodegeneration in Alzheimer's disease, and its eventual treatment, is much more complex than researchers have previously thought.

One in ten Americans over the age of 65 suffer from Alzheimer’s, rising to one in three in those over 80. It is the sixth-leading cause of death in the United States, and more than five million people currently live with the disease. Worldwide, that number jumps to nearly 50 million. Age is the most significant factor in whether a person shows symptoms of Alzheimer’s, and although diagnostic information to confirm the disease is improving, there are still no cures or treatments to slow down or stop the progression of the disease.

In all neurodegenerative diseases, degeneration begins in one part of the brain and is transmitted to other areas, causing widespread damage and loss of brain tissue. In Alzheimer’s, several things, such as the presence of A-beta peptide or an injury, can cause tau—a protein in neurons responsible for stabilizing those neurons—to begin shaping itself in dysfunctional ways; the first in a cascade of events. Scientists, however, are still unsure how this pathogenic tau is transferred from cell to cell, thus spreading across the brain and wreaking havoc. Understanding how to contain the disease to a small area of the brain could help slow its progression and halt the cognitive degeneration associated with Alzheimer’s.

“There have been a number of Alzheimer’s models that try to explain how malformed tau gets transmitted from one part of the brain to the other,” says Robinson. “Many of these models approach the problem from an all-or-nothing standpoint—normal tau protein only goes this way; malformed tau protein only goes that way, or malformed tau enters the cell this way; normal tau another way. However, operating under these models has historically produced seemingly conflicting data; data that researchers who study Alzheimer’s have been hard-pressed to reconcile.”

The evidence from Robsinson’s new study challenges these all-or-nothing models, as her team has recently discovered other ways cells can take up the tau protein, ultimately affecting how cells respond. According to Robinson, while past models’ may have seemingly contradicted one another’s findings, they are potentially all correct and were simply not looking at tau uptake holistically enough. Additionally, there is no evidence that cells have any way to differentiate and sort between normal and malformed tau.

“People have often thought that there is one protein on the surface of the cell that is responsible for the uptake of tau,” says Robinson. “But what we’ve found is that there are actually several pathways for tau to enter the cells. While pathogenic tau may be taken up slightly faster than normal tau, neurons and other cells in the brain take up both forms relatively quickly (in minutes). That means that keeping neurons passing healthy tau, rather than malformed tau, will take a much more nuanced treatment approach.”

The new data indicates that past efforts to create Alzheimer’s therapeutics have been misguided. According to previous models, if scientists could find the one pathway, enzyme or protein responsible for the uptake of malformed tau, they could turn it off, sort of like a light switch, using a single therapeutic. While the approach may have seemed appropriate due to the success of similar strategies for diseases like cystic fibrosis and diabetes, Robinson’s research proves this will likely never work as a way to treat Alzheimer’s.

“Based on our findings, Alzheimer’s requires a similar approach to HIV treatment, where you have a cocktail of drugs used to address different elements of the disease. Together, these drugs work toward the larger goal; treating the symptoms of Alzheimer’s in a particular patient.”

This new data gives scientists a better understanding of Alzheimer’s and how it spreads - moving one step closer toward a treatment for a disease that affects so many lives.

The research paper referred to in this article is titled “Heparan Sulfate Proteoglycans (HSPGs) Serve as the Mediator Between Monomeric Tau and Its Subsequent Intracellular ERK1/2 Pathway ActivationOpens in new window” and was published in the Journal of Molecular Neuroscience on January 18, 2022. 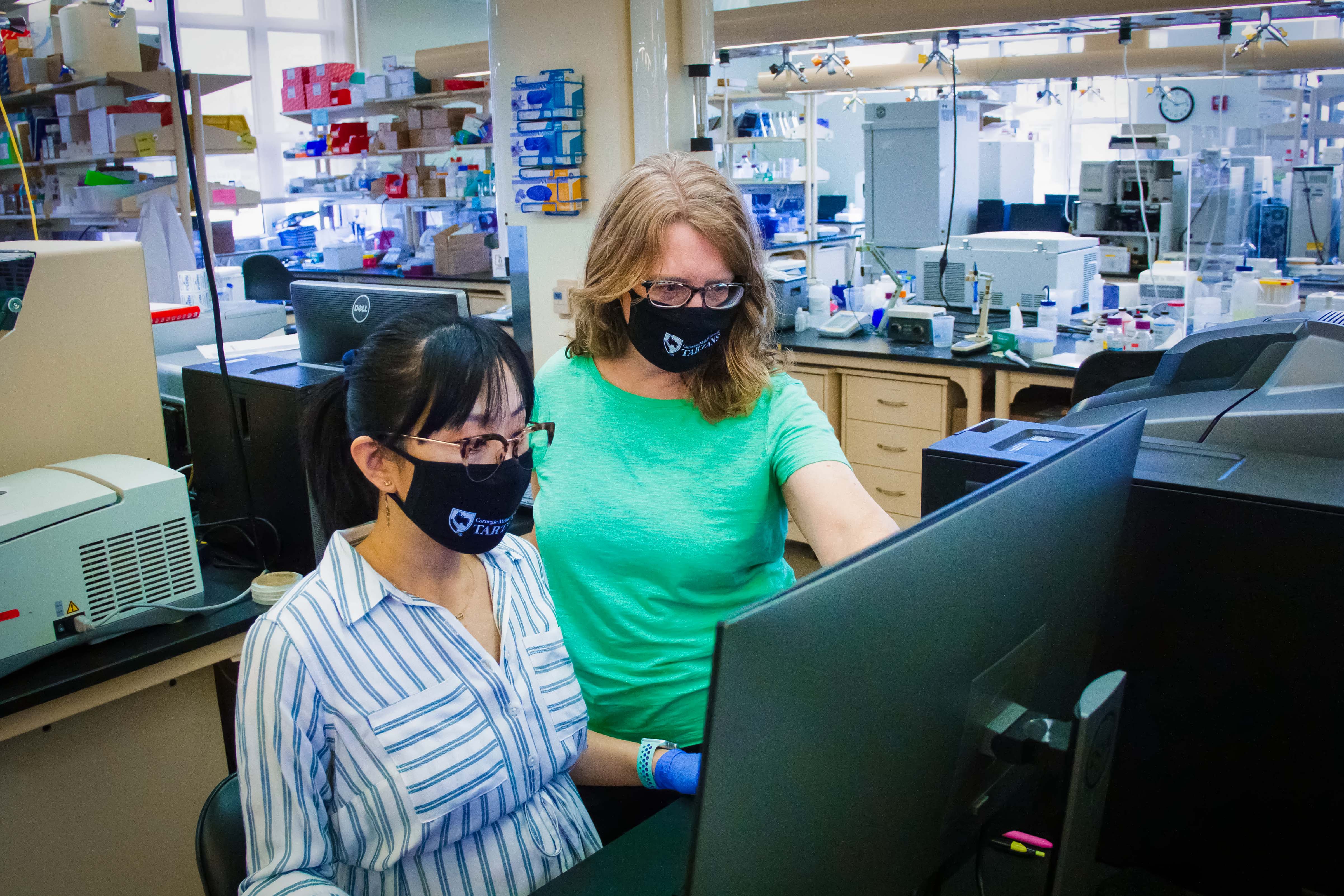 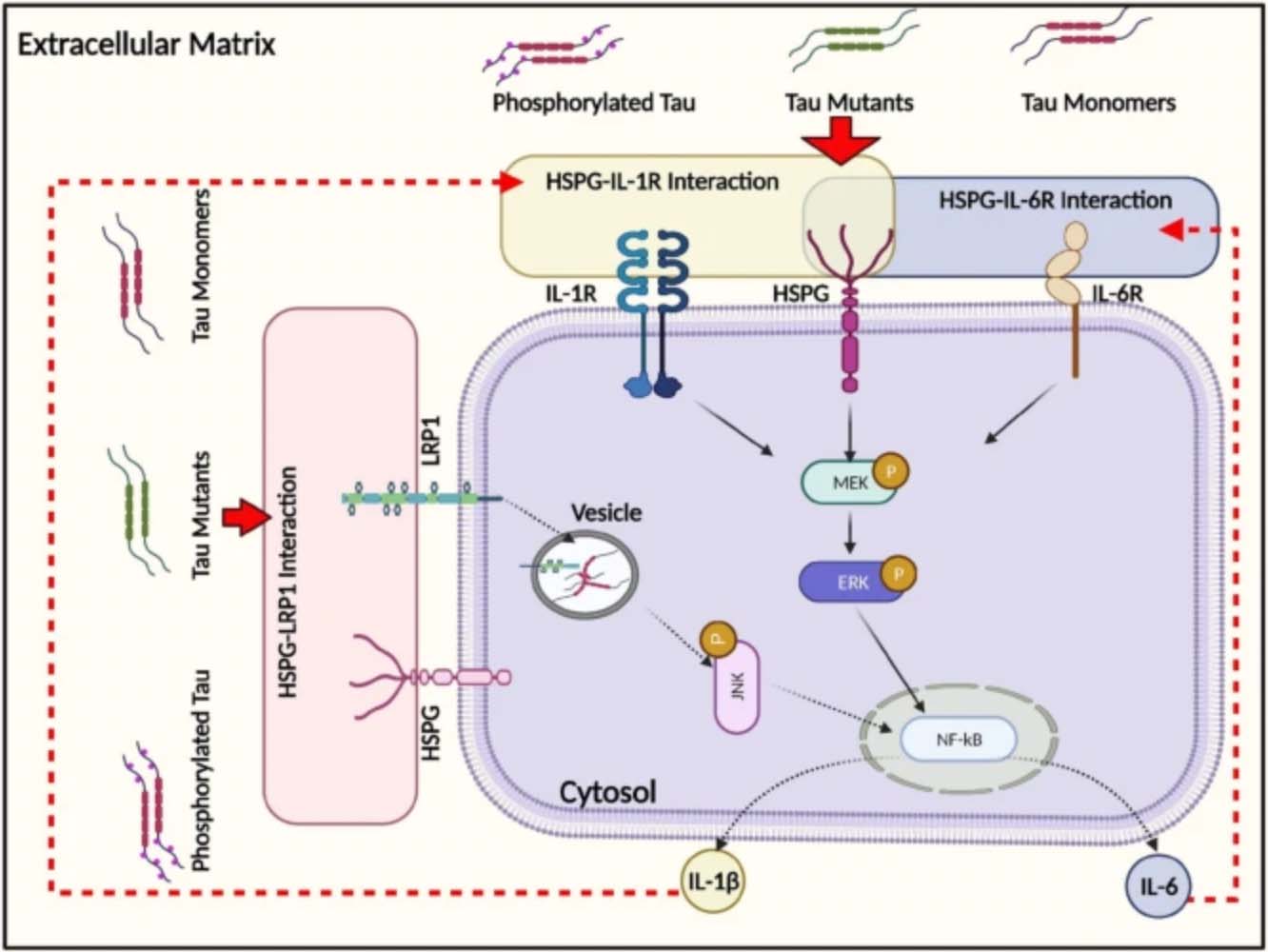 Schematic illustration of the intracellular responses affected by monomeric tau endocytosis. Monomeric tau is rapidly internalized by both neuronal and glial cells, mediated by the actin-dependent macropinocytosis pathway.