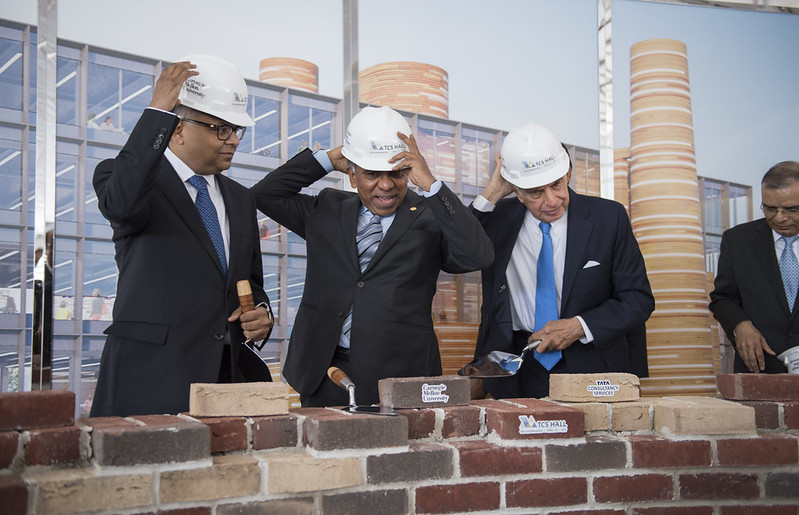 Carnegie Mellon University and Tata Consultancy Services, a leading global IT services, consulting and business solutions organization, today took another historic step in their partnership by breaking ground for a new facility on the CMU campus in Pittsburgh. The new “TCS Hall” is supported by an unprecedented $35 million grant from TCS, the largest ever industry donation to CMU.

Facing Forbes Avenue, at the western entrance to the CMU campus, TCS Hall is slated to open in 2018. The building will house research and academic spaces where the two institutions will collaborate on promoting next-generation technologies that will drive the 4th Industrial Revolution, including cognitive systems and autonomous vehicles.

In addition to the research and academic spaces, the 48,000-square-foot building will feature an innovation courtyard, an eco-sustainable rain garden and a “robot yard.” The high-tech facility will feature a steel-and-brick architectural design, to pay homage to Pittsburgh’s historical contribution toward previous industrial revolutions. Leading the design of the building is architect Roger Duffy, a partner of SOM and a 1979 graduate of CMU’s School of Architecture.

“The leadership of TCS and Tata Sons are harnessing the power of one of the world’s largest business groups to bring some of most promising new technologies to the marketplace,” said CMU President Subra Suresh. “We believe that, operating at the intersection of technology and humanity, CMU and TCS each bring extraordinary strengths to this unique partnership.”

“TCS’s capacity as a leader in global IT services will be a tremendous asset as the key ingredients of the 4th Industrial Revolution, such as artificial intelligence and robotics, machine learning, big data and deep data analytics, the internet of things, and cybersecurity become increasingly relevant in everyday life,” Suresh said.

“The history between the Tata Group and Pittsburgh has roots that go back more than a century. Our founder, Mr. Jamsetji Tata, came to the world’s steel-making capital in the early 20th century to understand technologies that he would later use to launch India’s own industrial revolution,” said Chandrasekaran. “We are pleased to come full circle and launch this facility, fostering further digital technology research in driving what is the largest economic and development opportunity ever faced by mankind — the 4th Industrial Revolution."

CMU has worked on cutting-edge technologies for many years, and Chandrasekaran praised its advances in the field.

“It is a great privilege for TCS to establish this TCS Hall and partner with CMU to promote the pioneering work in all of these technologies so that they’re able to create a better future and a better world for all of us,” Chandrasekaran said.

Ratan Tata, chairman emeritus of Tata Sons, called the CMU-TCS partnership a visionary collaboration of skills that will bring understanding between young people of India, the United States and other places in the world.

“Today, we’re not looking at heavy metal and millions of tons of steel. We’re looking at a collaboration of intellectual skills and the development of two countries together that might bring about global understanding between people,” Tata said.

“TCS and CMU share not only similar values and ambitions for strengthening education, but overlapping anniversary years as well. We are pleased to be laying the ground for this facility during CMU’s 50th year since its founding in 1967, and to see it come active during TCS’ own upcoming 50th year in 2018,” added Rajesh Gopinathan, CEO & MD of Tata Consultancy Services. “The research outcomes from this collaboration will drive applied innovation for our own clients worldwide, who are fast transforming themselves into agile businesses, built on digital platforms such as artificial intelligence, automation, cloud and robotics.”

The $35 million TCS grant also supports TCS Presidential Scholarships and Fellowships, with the first "TCS Scholars" selected and enrolled at CMU by the fall of 2017 and spring of 2018. TCS and CMU share a fundamental interest in STEM education. In the U.S., TCS is a founding partner of national initiatives such as MillionWomenMentors and US2020, and last week announced “Ignite My Future in Schools” to engage 20,000 U.S. teachers and 1 million K-12 students by embedding computer science and computational thinking into core subjects such as math, English and science. Carnegie Mellon, which has the nation’s top-ranked School of Computer Science, also continues to build on its own pipeline programs, including the Summer Academy for Math and Science, helping to prepare students from underserved communities.

"This is an exciting time for Pennsylvania and Carnegie Mellon University," said Pennsylvania Governor Tom Wolf. "We are very pleased to have TCS break ground in Pittsburgh, as they join a number of cutting-edge companies, which recognize the many benefits of locating in southwestern Pennsylvania. We look forward to increasing the state's economic growth by supporting university partnerships, which create jobs and enhance communities.”

Joining the celebration were Rajesh Gopinathan, chief executive officer of TCS, Sury Kant, president of TCS in North America, a delegation of other corporate leaders from the United States, and Pittsburgh civic leaders, including Allegheny County Executive Rich Fitzgerald.

“I want to thank Subra Suresh for his great leadership in this region,” Fitzgerald said. “The TCS-CMU relationship and partnership will, I’m sure, be beneficial to both entities. Collaboration and innovation are something we really take pride in.”

About Carnegie Mellon University:
Carnegie Mellon University is a private, internationally ranked research university with distinctive cores of excellence in areas ranging from science, technology and business, to public policy, the humanities and the arts. CMU faculty and scholars undertake ambitious research and performance projects at the intersection of technology and humanity, while its students go on to change the world through their professions and their lives. CMU challenges the curious and passionate to deliver work that matters.

About Tata Consultancy Services Ltd (TCS):
Tata Consultancy Services is an IT services, consulting and business solutions organization that delivers real results to global business, ensuring a level of certainty no other firm can match. TCS offers a consulting-led, integrated portfolio of IT, BPS, infrastructure, engineering and assurance services. This is delivered through its unique Global Network Delivery Model™, recognized as the benchmark of excellence in software development. A part of the Tata group, India’s largest industrial conglomerate, TCS has over 378,000 of the world’s best-trained consultants in 45 countries. The company generated consolidated revenues of U.S. $16.5 billion for year ended March 31, 2016 and is listed on the BSE Limited and National Stock Exchange of India Limited. For more information, visit us at www.tcs.com.

This story has been updated with quotes and images from the event.

Video: Highlights from the ceremony