President Barack Obama made his fifth visit to Carnegie Mellon University today, this time for The White House Frontiers Conference, a large gathering of national thought-leaders, to discuss building America's capacity in science, technology and innovation.

The conference, co-hosted by CMU and the University of Pittsburgh, included discussions about new technologies, challenges and goals in areas ranging from artificial intelligence and robotics to "smart" communities, health care and space exploration.

Science and technology demonstrations were on display, including CMU driverless vehicles and drones, a snake robot, service robots and a socially aware robot assistant.

CMU President Suresh thanked President Obama for coming to Pittsburgh, a hub of innovation, and to CMU, which has a long history of delivering work that matters.

In addition to its historic, pioneering work in engineering and robotics, Carnegie Mellon is forging into the future with life-altering research involving artificial intelligence, neuroscience and cybersecurity.

"This positions CMU like no other university in the world to work at the critical intersection of technology and human behavior," Suresh said. "It is there that we can create innovations that enhance lives. And it is there that we can foresee and plan for the unintended consequences that such revolutionary change brings."

President Obama thanked CMU and Pitt for turning their campuses into a "science fiction movie for today," but said this was nothing new for Pittsburgh.

"Pittsburgh has been revitalizing itself through technology for a very long time. The Steel City is now home to groundbreaking medical research and world-class universities. It's the birthplace of some of the most advanced artificial intelligence and robotics systems the world has ever seen. And you are investing in your young people with after-school STEM programs and maker fairs,  and Girls of Steel robotics teams," he said, referring to the CMU-sponsored high school girls championship robotics team.

President Obama spoke about his commitment to science.

"Innovation is in our DNA. Science has always been central to our progress. Only with science do we have the chance to cure cancer, Parkinson's or other diseases that steal our loved ones from us way too soon.

"It is that thing that sets us apart — that ability to imagine, hypothesize, and then test and figure stuff out, and tinker and make things, and make them better. Science drives innovation," he said.

"For us to use our brains doesn't mean we lose our heart." @POTUS on science and humanity #WHFrontiers

Steven Keating, a doctoral student at the Massachusetts Institute of Technology, discussed the challenges of finding out about his own health records. As a student he had volunteered for brain scans, which resulted in finding an abnormality that proved to be cancerous.

His research focuses on 3-D printing and synthetic biological fabrication, so he printed a version of his tumor in a 1:1 scale. Up next, is to print a 50-foot version of the tumor to help raise awareness and funding. His experience has led him to advocate for open access to medical records.

"If we have data that is patient centered and clear to use, we can drive the next revolution in health care from the ground up," he said. "And it wouldn't just help patients. It could help researchers. Facebook has 1.7 billion users, if even a fraction opted to share their data, it would be the largest medical study in history."

A panel discussed Obama administration's efforts to drive innovation in health care — such as the Precision Medicine Initiative and the BRAIN Initiative, of which Carnegie Mellon University is a part of.

Pittsburgh Mayor Bill Peduto shared the story of a city built on steel and rebuilt on innovation.

"Pittsburgh's overnight success story is 30 years of hard work," Peduto said. "We have evolved into a new city ready to take the challenge of being the model of a 21st-century city."

The track included talks about the future of urban transportation where people and vehicles interact as well as the importance of utilizing and sharing data to bring communities together and disrupt the cycle of incarceration within criminal justice systems.

Rayid Ghani, a 2001 Carnegie Mellon graduate and director of the Center for Data Science and Public Policy at the University of Chicago, was among the participants and cited the importance of using information in a way that benefits everyone within urban communities.

"Data allows you to personalize things at scale, so we can now personalize policies," he said. "We should make data-driven decisions in everything that we do. At the same time, we should make sure that it is actually personalized for everyone in a way that is equitable and fair."

"Pittsburgh has been revitalizing itself through technology for a long time." —@POTUS at the #WHFrontiers Conference

From the time the term artificial intelligence was coined 60 years ago, scientific leaders dreamed of machines that could mimic the intelligence of humans, said Jeannette Wing, vice president of Microsoft Research and a consulting professor of computer science at Carnegie Mellon. But they soon realized that wasn't feasible in the short term, so they divided human intelligence into subtasks, such as computer vision, speech and mobility, which each became its own field.

In the last five years technical advances, particularly with neural nets known as deep learning, have made it possible to again conceive of uniting the subcategories into a unified, general artificial intelligence.

Machine intelligence has become commonplace and part of workplaces, which has necessitated retraining workers, a process that is underway at many companies, she said. And universities and other educational institutions are trying to figure out what do students need to know about computers and about interacting with machines to improve society?

"That's a challenge for the universities to grapple with now," she said.

During a panel discussion on Challenges of AI, Andrew Moore, dean of the School of Computer Science, emphasized the need to ensure that AI systems are safe. Systems that are built to learn and improve themselves will require different types of testing than have traditionally been used to verify designs. That work is being conducted at universities such as Carnegie Mellon, Stanford and MIT, he noted.

"Before I, as a geek, launch something, I want the country to come back and tell me it's okay," he said. “It is such an exciting time to be a nerd who cares."

Moore said he was optimistic about the next generation of computer scientists at CMU, who he said care deeply about the planet and the ethical concerns of AI.

Stephen F. Smith, professor of robotics at CMU, discussed how AI could be used to improve urban traffic flow. In Pittsburgh, computers and cameras are deployed at 50 intersections, where they calculate how to optimize traffic flow.

The computers share information, and two dozen intersections can receive and send signals to cars, helping the system tell the difference between buses and other vehicles.

"We really believe smart infrastructure is the key to future urban mobility," Smith said, noting self-driving cars in particular will be able to interact with these adaptive traffic signals to improve traffic flow.

Global: Technology, Tools and Design for a Climate-Smart Future

Astro Teller, captain of Moonshots at X and a CMU alumnus wants to make sure that to create environmental innovations, people are looking at the right problems to solve.

Among other projects at X, Teller is designing a windmill with three propeller-like blades that would lift high into the atmosphere without the expensive and massive steel shaft confining it to the ground. Similarly to his research into harnessing wind power, he urged the audience to find strange, unknown possibilities.

"Work with me to be a little weirder, to step back a little farther," Teller said.

Costa Samaras, director at CMU's Center for Engineering and Resilience for Climate Adaptation and an assistant professor in the Department of Civil and Environmental Engineering, talked about designing for a climate smart future.

"The most important thing I tell my engineers is to listen," Samaras said.

"We have to open up that book and say that's gone," he said. Part of the skills he wants students to leave with is learning interdisciplinary skills of cooperation. "We need a new world of engineering and creative engineering, with risk and understanding cost-benefit analysis and designing for adaptation and figuring out along the way."

When Obama wrote his op-ed for the November issue of WIRED, he mentioned that he grew up watching "Star Trek," and the show had an influence on his worldview.

"What I loved about it was its optimism, the fundamental belief at its core that the people on this planet, for all our varied backgrounds and outward differences, could come together to build a better tomorrow," he wrote.

The son of the creator of "Star Trek" told the audience that plot points of Star Trek can be found in the exploration in diversity.

"One should be open to reasonable perspectives and points of view regardless of where they come from," said Rod Roddenberry, Jr.

Advancing space exploration has become an international mission accomplished via entrepreneurship, STEM education, small satellites and the idea that space can ultimately be a place to stay.

"It's about time for another giant leap for mankind," Roddenberry said.

To help mitigate some of the risks to humans associated with space, robots are coming into place.

Red Whittaker, chairman and chief science officer for Astrobotics and CMU faculty member, said that robots will act as the initial contact for exploring the planet as well as building and testing resources for human establishment on Mars.

"The robots are essential," Whittaker said. "Robots who support human missions are robots that work." 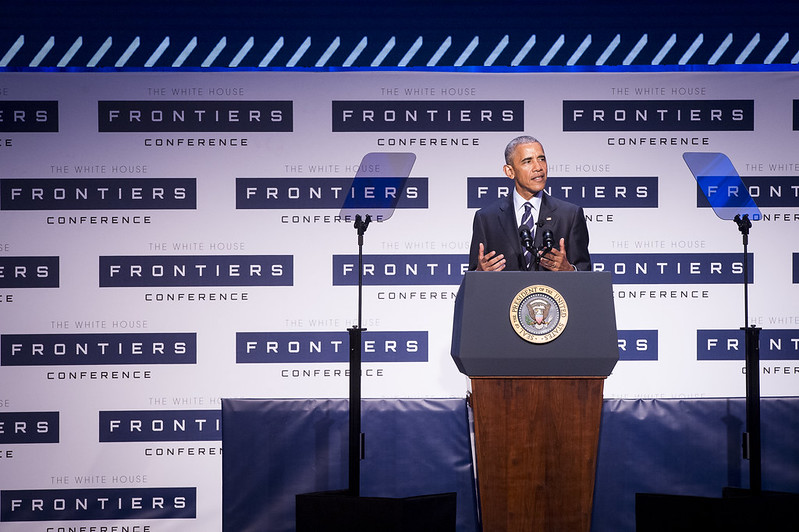