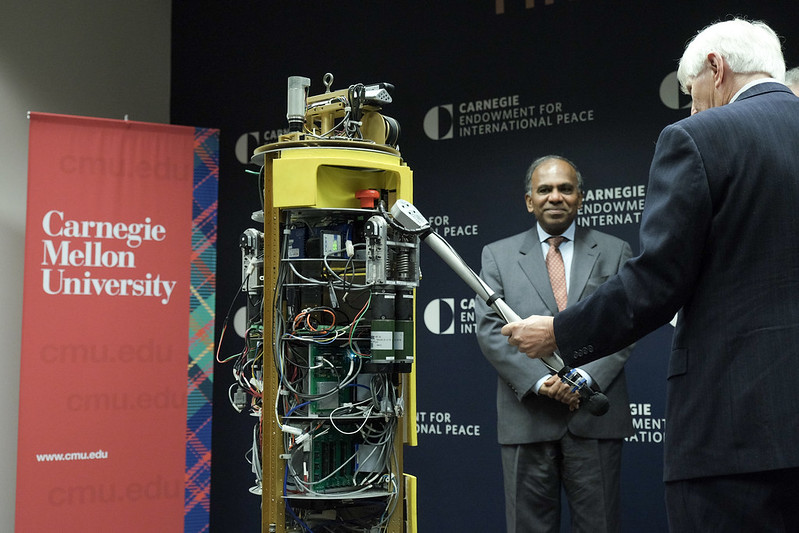 Policy experts from several countries discussed the implications of artificial intelligence on data privacy and military operations at the inaugural Carnegie Colloquium in Washington, D.C.

Carnegie Mellon University and the Carnegie Endowment for International Peace (CEIP) co-hosted the Oct. 31 event at CEIP headquarters. The second part of the colloquium is set for Dec. 2 at CMU's Cohon University Center in Pittsburgh and will focus on internet governance and cyber deterrence.

CMU President Subra Suresh told more than 120 people in attendance that the university's advances in AI and cybersecurity benefit from Carnegie Mellon's partnership with (CEIP).

"We hope these discussions will better inform ongoing thinking about how technology affects global society and diplomacy," Suresh said.

In a panel discussion on the future of consumer privacy, Andrew Moore, dean of CMU's School of Computer Science, posed some of the challenges to consumers created by artificial intelligence.

"Privacy and personalization, which seem like clear goods, lead us to very difficult societal and technical challenges," Moore said.

Panelists in the discussion included: Ed Felton, deputy CTO of the White House and a computer science professor at Princeton University; Yuet Tham, a partner at Sidley Austin in Hong Kong; and Paul Timmers, director of the Sustainable and Secure Society Directorate in the European Commission Communications Networks.

CyLab Director David Brumley set the stage for a second panel discussion focusing on autonomous technology  and counter-autonomy in military operations. Brumley recently led a team that won the DARPA Cyber Grand Challenge, an autonomous hacking competition in which systems competed for a $2 million prize.

"Countries around the world, including the U.S., Russia, Israel, China and India, are increasingly deploying and investing in artificial intelligence and autonomy technology in their operations," said Brumley, a professor of electrical and computer engineering. "Autonomy is going to be huge, and it's absolutely critical we get it right."

"The wide span of impact from artificial intelligence and cybersecurity demands these kinds of international discussions," said Jim Garrett, dean of CMU's College of Engineering. "These forums provide an exchange of ideas, an appreciation for a wide variety of views and a debate on tough topics."