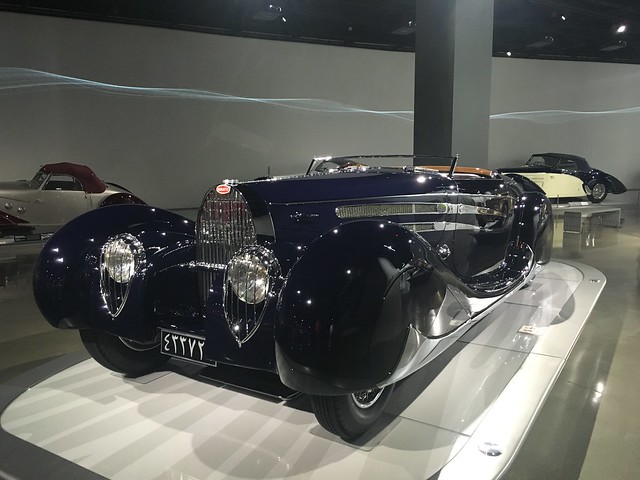 Picture yourself behind the wheel of Steve McQueen’s 1956 Jaguar. That’s the excitement you’d get at the newly detailed Petersen Automotive Museum in Los Angeles, thanks to Carnegie Mellon University alumni who helped drive the renovation project.

The museum, which closed in 2014 for the $125 million renovation project, houses more than 100 priceless vehicles, from McQueen’s Jaguar XKSS to Herbie the Love Bug, with just as many housed in a vault open to the public for tours.

The Scenic Route, a firm whose creative staff includes more than half a dozen CMU College of Fine Arts alumni, was responsible for the project, which included updating technical details, such as earthquake safety and accessibility.

On a walkthrough of the gallery space, redesign project manager Naomi Eduardo points out a garbage receptacle.

"We were painting those trash cans late one night the week before we opened," said Eduardo, who received her bachelor's degree in drama in 2010. "A guest would probably never notice if they didn't match the color scheme. But we notice."

Eduardo worked to maintain the museum's artistic vision, under a 13-month redesign deadline that aimed to refine the museum's visitor experience.

"While we did not have anything to do with the exterior design, we worked closely with the museum's curatorial staff to develop a master plan for the entire museum and create the content for all exhibit materials, including all exhibit text, interactives and videos," Eduardo said.

Scenic Route also designed and fabricated all exhibit fixtures for mounting artifacts, displaying cars and a grand staircase that visitors use to navigate between the three exhibit floors. Essentially anything seen inside the museum was designed, fabricated and installed by Scenic Route.

The work is paying off, as the Petersen Automotive Museum has maintained a steady increase in attendance since it reopened at the end of 2015.

The team also considered how the 200,000 square-foot space is used for events, such as how to move guests between floors.

"The staircase was by far the most involved item we provided for the museum," said Ethan Weil, who received his bachelor's degree in drama in 2012. The team built a full-size prototype of the grand staircase before actual construction began.

"Building a full-scale mockup let us check that the design was easy to fabricate, that the dimensions and details all looked and felt right on the outside, and what acoustic properties the stairs would have," Weil said.

The team also enhanced video capabilities of the museum, which previously had 10 flat screens. They installed 47 projectors, 35 interactive touchscreens, a 134-foot, 180-degree projection wall and more.

For a project of this scale, the team turned to lessons learned at Carnegie Mellon.

"[CMU's Technical Direction program] really emphasized how to help structure and manage sprawling, collaborative work," Weil said. "When so many disciplines are involved in any project, it's easy for things to fall through the gaps or for one team to waste time solving a problem that another team has already eliminated. I would credit the management component of the program with equipping me to navigate these challenges and help keep a bunch of different departments working smoothly together toward a unified goal."

"[The School of Drama] has given me so much preparation in ways I could have never anticipated," Eduardo said. "The drama program is very rigorous and the biggest thing I was able to get from it was my work ethic. I've always been a hard worker, but it's about working intelligently, not necessarily harder than anyone else."

Along with the high tech additions, the team left their fingerprints on the project. One wall includes photographs from The Scenic Route's staff showing first car experiences. Eduardo called the addition of a photo of her from childhood as something very special.

"Though it’s a simple photograph within an exhibit, there’s something deeply personal and touching about being part of an exhibit that will live on for years to come," she said.