Carnegie Mellon University sent the largest delegation of any university to the World Economic Forum’s Annual Meeting of the New Champions in Dalian, China, Sept. 9-11, along with robots and Big Data visualization demonstrations.

“Carnegie Mellon is always on the cutting edge of technology innovation, particularly technologies that collaborate with people to address the most pressing challenges of our time, so the World Economic Forum meetings are natural venues in which to share our ideas and demonstrate our technologies,” said Justine Cassell, CMU’s associate vice provost of Technology Strategy and Impact.

“The Annual Meeting of the New Champions, held in China each year, attracts business, government and civil society leaders who are looking for exactly these sorts of discoveries that will speed the rate of technological progress, while ensuring economic prosperity for all,” added Cassell, who is a member of the WEF’s Global Agenda Council on Artificial Intelligence and Robotics, the Global Agenda Meta-Council on the Future of Health, and the Steering Committee for the WEF New Visions for Education project.

More than 1,500 global leaders in business, government, civil society, academia and media attended this year’s meeting in Dalian, often called “Summer Davos” in reference to the WEF’s influential winter conference in Davos, Switzerland. Fifteen CMU faculty members, students and staff participated in a number of presentations and demonstrations throughout the conference.

"Carnegie Mellon is always on the cutting edge of technology innovation, particularly technologies that collaborate with people to address the most pressing challenges of our time." — Justine Cassell

One highlight was an IdeasLab presented by CMU on “Machine Learning for Health.” Andrew Moore, dean of the School of Computer Science and author of a recent WEF commentary on how artificial intelligence can make people healthier, introduced the session, which covered such topics as using machine learning to predict neuro-degenerative disease, using predictive analytics to prevent epidemics and the ways in which machine learning might help doctors, hospitals and health insurers.

Moore also was part of a Thursday panel discussion, “Navigating the Next Technological Revolution,” chaired by Klaus Schwab, the WEF’s founder and executive chairman.

Carnegie Mellon’s pre-eminence in robotic technology was on display throughout the conference in a “Meet the Robots” exhibition curated by Cassell in collaboration with WEF staff. In a demonstration led by William “Red” Whittaker, professor of robotics, participants were given the chance to remotely drive CMU’s Andy lunar rover half a world away near Pittsburgh. Andy traversed a pit at the LaFarge North America’s aggregate mining site in West Mifflin, which, under the artificial lighting necessary during what was nighttime in Pennsylvania, resembled a lunar landscape.

Ralph Hollis, professor of robotics, demonstrated his Ballbot, a robot about the width and height of a person that moves and balances atop a sphere the size of a bowling ball. By employing dynamic balance, Ballbot can maneuver in offices, homes and other environments designed for humans.

Carnegie Mellon’s pre-eminence in robotic technology was on display throughout the conference in a “Meet the Robots” exhibition.

Cassell demonstrated “virtual peers,” animated video characters that can engage students in conversation. Typically displayed on large video flatscreens, these virtual peers have been used to assess and strengthen the social skills of autistic children and to investigate the role of vernacular in the classroom, among other applications.

Whittaker, Cassell and Hollis also were part of a panel on “Robots Without Borders,” that examined the potential roles for, and implications of, robots and how to maximize their benefits to society. Rodney Brooks, the founder of ReThink Robotics, participated in the discussion, which was facilitated by noted British broadcaster Nik Gowing.

Inside the exhibit hall of the Dalian International Conference Center, the WEF constructed a dedicated, glass-enclosed presentation space for Carnegie Mellon’s CREATE Lab to demonstrate its unique Earth Time-Lapse technology for visualizing large databases and making them “explorable.”

Using a nine-screen video hyperwall, Illah Nourbakhsh, professor of robotics, and Randy Sargent, senior systems scientist in the Robotics Institute, made 20 presentations over the three days using Landsat satellite imagery and other visualizations to explore Asian industrialization, climate change, deforestation and the impact of energy production. Their technology, used in such projects as Time Machine and the BreatheCam that tracks Pittsburgh’s air pollution, enables users to better understand massive amounts of data by letting them seamlessly move back and forth through time and to focus in on areas of interest as necessary.

In addition to the demos, Nourbakhsh joined Matthew Hansen, a remote sensing specialist at the University of Maryland, for a BetaZone session on Wednesday on “Discovering Disruptive Change with Big Data.”

Louis-Philippe Morency, associate professor in CMU’s Language Technologies Institute, was recognized by the WEF as one of this year’s class of Young Scientists — scientists under the age of 40 selected for their contributions to advancing the frontiers of science, engineering or technology in areas of high societal impact. Morency’s research focuses on the use of computer vision, machine learning and social psychology to analyze, recognize and predict subtle human communicative behaviors during social interactions. He foresees applications in medicine, robotics and education, among other areas.

On Friday, Morency participated in a BetaZone discussion, led by Cassell, on “How to Build an Intelligent Machine.”

CMU spinoff Neon, co-founded by Michael Tarr, head of the Department of Psychology, and Neon CEO Sophie Lebrecht, was recognized at the Dalian meeting as one of the world’s 49 most promising Technology Pioneers. Neon uses neuroscience and machine learning to automatically select the video and photo images that resonate best with users.

Many of the conference’s public sessions are available as posted videos. For more information from the event, visit the meeting’s website. Find out more about CMU’s participation.

CMU is one of only 25 universities in the world, 12 in the United States, that have been invited to join the WEF’s Global University Leaders Forum (GULF) and to participate in WEF meetings such as Dalian and Davos. Participants in a "Meet the Robots" exhibition were able to remotely drive CMU's lunar rover, Andy, from half a world away. 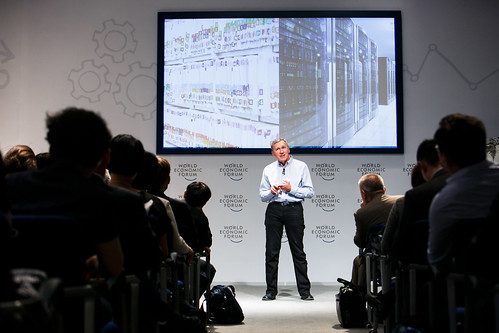