Over the past decade, the West has been faced with the strategic challenge posed by a resurgent Russia. Choosing adversity over cooperation, Russian actions at NATO’s Eastern Frontier, in blatant disregard for the international order, are a harsh reminder of the return of the great power competition. The way forward in facing this common strategic challenge requires transatlantic security and unity of the Western civilization. As a NATO and EU member and a littoral country of the Black Sea, Romania has been at the forefront of the efforts to bring stabilization and security to this contested space. A strong U.S. ally and strategic partner, Romania’s regional leadership proves essential to address contemporary security challenges.

George Cristian Maior has been accredited as Ambassador Extraordinary and Plenipotentiary of Romania to the United States, as per Decree no 583 of June 29th, 2015, signed by the President of Romania. He has officially commenced his mandate on September 17th, 2015, upon presenting his Letters of Credence to the Honorable Barack Obama, President of the United States of America.

Between 1992 and 1997, he was a diplomat in the Ministry of Foreign Affairs, within the Department of Treaties and Department of Strategic Affairs. Between 1997 and 1999, he was Chargé D’affaires at the Romanian Embassy in Dublin, Ireland. In 2004, he was conferred the rank of Ambassador.

Between 2000 and 2004, he held the position of State Secretary and head of the Department for Euro-Atlantic Integration and Defense Policy within the Ministry of National Defense. In that capacity, he was responsible for coordinating the strategic and military dimension of Romania’s NATO accession process.

In November 2004, Mr. Maior was elected Senator in the Romanian Parliament, where he held various positions, including Chairman of the Committee for Defense, Public Order and National Security; member of Joint Committee for the Parliamentary Oversight on the Foreign Intelligence Service Activity, and member of the Senate Committee for Human Rights, Cults and Minorities.

Following his nomination by the President of Romania and the vote received from the Romanian Parliament, on October 4th, 2006, George Cristian Maior was appointed the 4thDirector of the Romanian Intelligence Service. During his eight years at the helm of this institution (up until February 2015), the SRI went through an extensive reform process which allowed it to strengthen bilateral and multilateral partnerships with the most important intelligence services in the democratic world, as well as to gain and consolidate a high level of public confidence.

A Law graduate, Mr. Maior received in 1992 his LL.M. in International and Comparative Law at the George Washington University, Washington DC. In 1997, he was conferred a PhD in International Law at the “Babeş Bolyai” University in Cluj Napoca. His PhD dissertation, “National and European Features in Strasbourg European Court Jurisprudence”, was nominated for the UNESCO Most Prize in 1998.

He is a university professor and PhD coordinator at the Department of International Relations and European Integration within the National School of Political Studies and Public Administration in Bucharest. He published a great number of articles and books covering topics from human rights and public law to international relations, strategic thinking, security and intelligence studies.

He was invited as keynote speaker at prestigious universities, organizations, and think-tanks (Harvard Kennedy School of Government, George Washington University, American University, National Intelligence University, Atlantic Council, Center for Strategic and International Studies, Chicago Council on Global Affairs, Center for European Policy Analysis, AIPAC, etc.). He is a member of the Honorary Board of Advisors of the “National Student Leadership Foundation.”

The President of Romania awarded George Cristian Maior the National Order of “Faithful Service” in rank of Knight, the National Order “Star of Romania” in rank of Knight and the National Order “Star of Romania” in rank of Officer. In April 2014, he became a Knight of the “Legion of Honor” order, a title conferred by the President of France. In 2017, The Director of the Central Intelligence Agency (CIA) awarded George Cristian Maior the “Earl Warren Medallion” for the outstanding partnership with the United States and exceptional leadership during his tenure as Director of Romanian Intelligence Service (SRI).  Additionally, he is a Doctor Honoris Causa of the Military Technical Academy in Bucharest, of the “Andrei Saguna” University in Constanta and of the West University in Timisoara.

He was born on November 16, 1967, in Cluj-Napoca. He is married to Anamaria Maior and has two children. 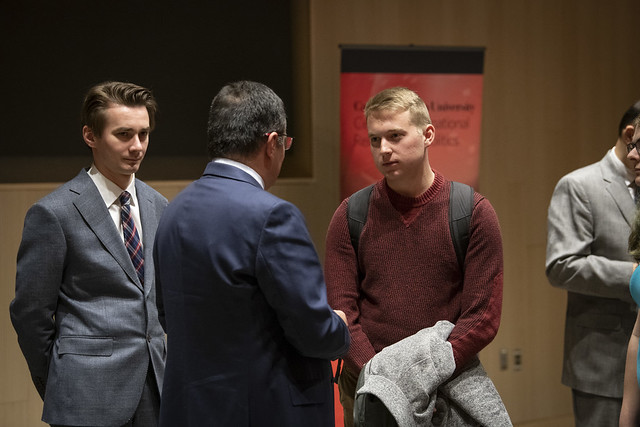