Bolivian democratic norms and institutions have experienced a systematic erosion in the last years. In October, President Evo Morales will run for office for the fourth time, in blatant contradiction of the constitution he helped to create. How can we understand this democratic decay? According to former Bolivian President Jorge Quiroga, three international processes are part of the explanation: Chinese economic involvement, Venezuelan political interference, and institutional corruption. Bolivia -and other countries in the region- have been at the crossroads of these tendencies, enjoying a boom in exports, following the Venezuelan authoritarian model with indefinite re-elections and mired in corruption scandals. Jorge Quiroga will give an overview of these three tendencies and what is in store in the years ahead.

Quiroga is a 1981 graduate of Texas A&M University with a degree in industrial engineering, becoming the first head of state from that university. He went on to be a self-declared "corporate yuppie" working for I.B.M. in Austin, Texas while earning a master's degree in business administration from St. Edward's University. He then moved back to Bolivia; like many other Bolivian presidents he is of European descent of Spanish blood.

In 1997, he was elected as Vice President of Bolivia. At forty-one, he was the youngest vice president in Bolivia's history. He became President when Hugo Banzer resigned because of aggravated health problems. Quiroga assumed office as acting president on July 1, 2001 and was sworn-in on August 7 to complete Banzer's five-year mandate.

Quiroga ran for President in his own right in the 2005 election, as the candidate for a new right-of-center coalition known as Social and Democratic Power (PODEMOS), which included the bulk of Banzer's former ADN organization. His main opponent was the leftist Evo Morales of the Movement Towards Socialism. Morales won the election and Quiroga finished a distant second place, receiving 28.6 percent of the vote.

Quiroga has received the World Leader of Tomorrow Award from the World Economic Forum in Davos, Switzerland. He has also worked as a consultant for the World Bank and the International Monetary Fund. He is a member of the Club de Madrid, a group of more than eighty former presidents and prime ministers of democratic countries, which works to promote democratic leadership and governance.

Sponsored by the Center for International Relations and Politics 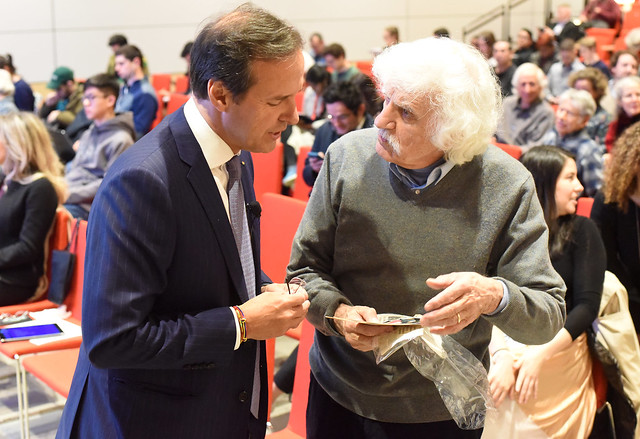