New research suggests that NASA's James Webb Space Telescope, set to launch in 2021, will be able to reveal the host galaxies of some distant quasars despite their small sizes and obscuring dust. The study made use of a powerful computer simulation developed by a team of Carnegie Mellon University researchers led by Professor of Physics Tiziana Di Matteo, director of the McWilliams Center for Cosmology.

Although quasars are known to reside at the centers of galaxies, it's been difficult to tell what those galaxies are like and how they compare to galaxies without quasars. The challenge is that the quasar's glare makes it difficult or impossible to tease out the light of the surrounding host galaxy. It's like looking directly into a car headlight and trying to figure out what kind of automobile it is attached to.

"We want to know what kind of galaxies these quasars live in. That can help us answer questions like: How can black holes grow so big so fast? Is there a relationship between the mass of the galaxy and the mass of the black hole, like we see in the nearby universe? said lead author Madeline Marshall of the University of Melbourne in Australia, who conducted her work within the ARC Centre of Excellence in All Sky Astrophysics in 3 Dimensions.

Answering these questions is challenging for a number of reasons. In particular, the more distant a galaxy is, the more its light has been stretched to longer wavelengths by the expansion of the universe. As a result, ultraviolet light from the black hole's accretion disk or the galaxy's young stars gets shifted to infrared wavelengths.

In a recent study, astronomers used the near-infrared capabilities of NASA's Hubble Space Telescope to study known quasars in hopes of spotting the surrounding glow of their host galaxies, without significant detections. This suggests that dust within the galaxies is obscuring the light of their stars. Webb's infrared detectors will be able to peer through the dust and uncover the hidden galaxies.

"Hubble simply doesn't go far enough into the infrared to see the host galaxies. This is where Webb will really excel, said Rogier Windhorst of Arizona State University in Tempe, a co-author on the Hubble study. 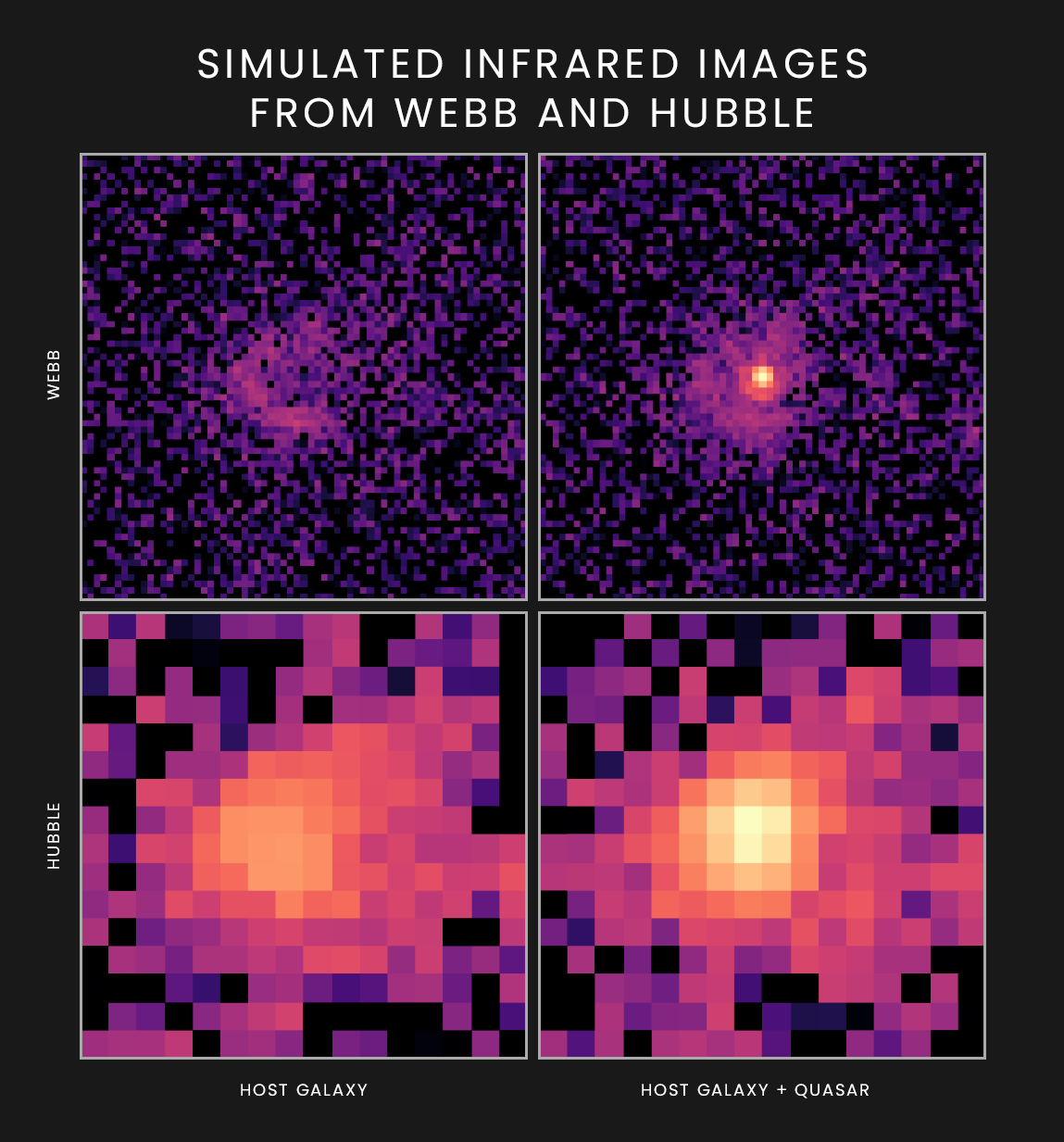 To determine what Webb is expected to see, the team used a state-of-the-art computer simulation called BlueTides, developed by a Carnegie Mellon team including Di Matteo and Professor of Physics Rupert A.C. Croft.

"BlueTides is designed to study the formation and evolution of galaxies and quasars in the first billion years of the universe's history. Its large cosmic volume and high spatial resolution enables us to study those rare quasar hosts on a statistical basis," said Carnegie Mellon graduate student Yueying Ni, who ran the BlueTides simulation. BlueTides provides good agreement with current observations and allows astronomers to predict what Webb should see.

The team found that the galaxies hosting quasars tended to be smaller than average, spanning only about 1/30 the diameter of the Milky Way despite containing almost as much mass as our galaxy. "The host galaxies are surprisingly tiny compared to the average galaxy at that point in time, said Marshall.

The galaxies in the simulation also tended to be forming stars rapidly, up to 600 times faster than the current star formation rate in the Milky Way. "We found that these systems grow very fast. They're like precocious children – they do everything early on, explained co-author Di Matteo.

The team then used these simulations to determine what Webb's cameras would see if the observatory studied these distant systems. They found that distinguishing the host galaxy from the quasar would be possible, although still challenging due to the galaxy's small size on the sky.

"Webb will open up the opportunity to observe these very distant host galaxies for the first time, said Marshall.

They also considered what Webb's spectrographs could glean from these systems. Spectral studies, which split incoming light into its component colors or wavelengths, would be able to reveal the chemical composition of the dust in these systems. Learning how much heavy elements they contain could help astronomers understand their star formation histories, since most of the chemical elements are produced in stars.

Webb also could determine whether the host galaxies are isolated or not. The Hubble study found that most of the quasars had detectable companion galaxies, but could not determine whether those galaxies were actually nearby or whether they are chance superpositions. Webb's spectral capabilities will allow astronomers to measure the redshifts, and hence distances, of those apparent companion galaxies to determine if they are at the same distance as the quasar.

Ultimately, Webb's observations should provide new insights into these extreme systems. Astronomers still struggle to understand how a black hole could grow to weigh a billion times as much as our Sun in just a billion years. "These big black holes shouldn't exist so early because there hasn't been enough time for them to grow so massive, said co-author Stuart Wyithe of the University of Melbourne.

Future quasar studies will also be fueled by synergies among multiple upcoming observatories. Infrared surveys with the European Space Agency's Euclid mission, as well as the ground-based Vera C. Rubin Observatory, a National Science Foundation/Department of Energy facility currently under construction on Cerro Pachón in Chile's Atacama Desert. Both observatories will significantly increase the number of known distant quasars. Those newfound quasars will then be examined by Hubble and Webb to gain new understandings of the universe's formative years.

Other authors on the study, published in the Monthly Notices of the Royal Astronomy Society, include Madeline A. Marshall and J. Stuart B. Wyithe of the University of Melbourne and Stephen Wilkins and Juusi K. Kuusisto of the University of Sussex. The research was supported by grants from the Australian Research Council Centre of Excellence for All Sky Astrophysics in 3 Dimensions, NASA and the National Science Foundation.