An international group of researchers, including Carnegie Mellon University’s Rachel Mandelbaum, has released the deepest wide field map of the three-dimensional distribution of matter in the universe ever made and increased the precision of constraints for dark energy with the Hyper Suprime-Cam survey (HSC).

Three-dimensional picture of the distribution of matter in the universe. (Credit: HSC Survey)

The present-day universe is a pretty lumpy place. As the universe has expanded over the last 14 billion years or so, galaxies and dark matter have been increasingly drawn together by gravity, creating a clumpy landscape with large aggregates of matter separated by voids where there is little or no matter.

The gravity that pulls matter together also impacts how we observe astronomical objects. As light travels from distant galaxies towards Earth, the gravitational pull of the other matter in its path, including dark matter, bends the light. As a result, the images of galaxies that telescopes see are slightly distorted, a phenomenon called weak gravitation lensing. Within those distortions is a great amount of information that researchers can mine to better understand the distribution of matter in the universe, and it provides clues to the nature of dark energy.

The HSC map, created from data gathered by Japan’s Subaru telescope located in Hawaii, allowed researchers to measure the gravitational distortion in images of about 10 million galaxies.

The Subaru telescope allowed them to see the galaxies further back in time than in other similar surveys. For example, the Dark Energy Survey analyzes a much larger area of the sky at a similar level of precision as HSC, but only surveys the nearby universe. HSC takes a narrower, but deeper view, which allowed researchers to see fainter galaxies and make a sharper map of dark matter distribution.

The research team compared their map with the fluctuations predicted by the European Space Agency Planck satellite’s observations of the cosmic microwave background radiation — radiation from the earliest days of the universe. The HSC measurements were slightly lower than, but still statistically consistent with Planck’s. The fact that HSC and other weak lensing surveys all find slightly lower results than Planck raises the tantalizing question of whether dark energy truly behaves like Einstein’s cosmological constant. 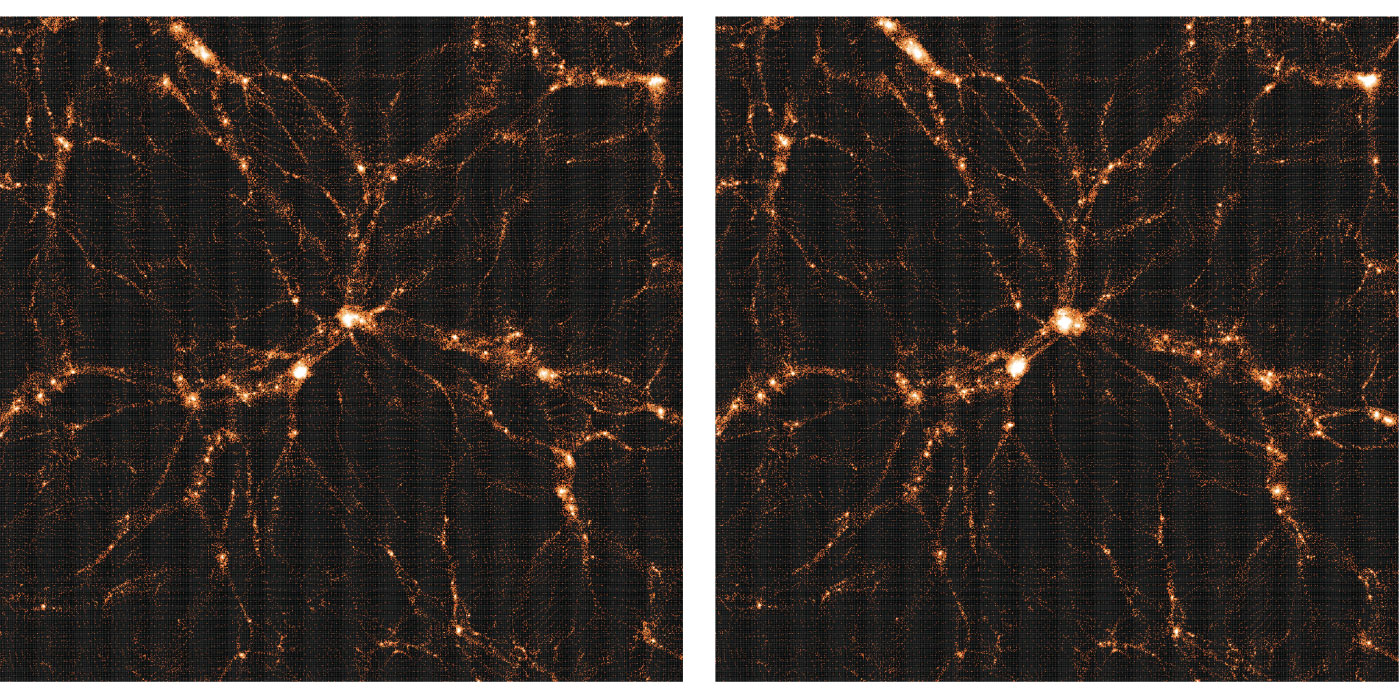 The weak lensing surveys such as HSC (left) prefer a slightly less clumpy universe than that predicted by Planck (right). Credit: HSC Survey

“Our map gives us a better picture of how much dark energy there is and tells us a little more about its properties and how it’s making the expansion of the universe accelerate,” Mandelbaum said. “The HSC is a great complement to other surveys. Combining data across projects will be a powerful tool as we try uncover more and more about the nature of dark matter and dark energy.”

Measuring the distortions caused by weak gravitational lensing isn’t easy. The effect is quite small and distortions in galaxy shapes can also be caused by the atmosphere, the telescope and the detector. To get precise, accurate results, researchers need to know that they are only measuring effects from weak lensing.

Mandelbaum, associate professor of physics and member of the McWilliams Center for Cosmology at Carnegie Mellon, is an expert at controlling for these outside distortions. She and her team created a detailed image simulation of the HSC survey data based on images from the Hubble Space Telescope. From these simulations, they were able to apply corrections to the galaxy shapes to remove the shape distortions caused by effects other than lensing.

These results come from the HSC survey’s first year of data. In all, the HSC survey will collect five years of data that will yield even more information about the behavior of dark energy and work towards other goals such as studying the evolution of galaxies and massive clusters of galaxies across cosmic time, measuring time-varying objects like supernovae, and even studying our own Milky Way galaxy.

In addition to Mandelbaum, lead authors of the study are Chiaki Hikage, Masamune Oguri and Masahiro Takada of the Kavli Institute for the Physics and Mathematics of the Universe (Kavli IPMU) and University of Tokyo; Takashi Hamana of the National Astronomical Observatory of Japan; and Surhud More of Kavli IPMU and the Inter-University Center for Astronomy and Astrophysics.

The research will be uploaded to the preprint server https://arxiv.org and will be submitted to the Publication of the Astronomical Society of Japan.