During his first meeting as CEO, A. William Stein (MSIA 1988) told his direct reports, “The First Amendment is hereby reinstated at Digital Realty Trust. So all of you have the right to speak your mind.”

He emphasized that commensurate with that right, you also have an obligation to speak up. “We’re going to make a decision at this table, and when we walk out of the room, we all need to be behind that decision.” Stein is committed to a culture of teamwork, collaboration, transparency, and communication.

The discussion was facilitated by Dean Robert Dammon, who started the conversation by asking Stein to describe Digital Realty’s business model. “We’re organized as a real estate investment trust,” he said. “We happen to own data centers, which is what I would call technical real estate.” The company offers space for its client companies to house and power their servers.

Significantly, Stein said, Digital Realty does not own the servers — they belong to the client company. “Those tend to go obsolete every three or four years, and we don’t want to own real estate or personal property that goes obsolete.” Instead, Digital Realty owns the land and buildings that house the data centers. They specialize in building and running data centers in strategic metropolitan areas around the world.

Stein joined GI Partners, “the private equity predecessor to Digital Realty Trust,” before it went public in 2004. During his career there, Stein had served as both chief financial officer and chief investment officer before becoming CEO in 2014.

Some of the major changes Stein has brought to Digital Realty since 2014 have been rapid expansion — both through strategic acquisitions and organic growth — and a substantial focus on growing its reliance on renewable power. “These are power-dense structures, because these servers take a lot of power, and it takes a lot of power to cool the servers,” Stein said. He hired a graduate of Carnegie Mellon to run Digital Realty’s renewable power initiatives, who has helped make the company one of the largest users of renewable energy in the United States.

Under Stein’s leadership, Digital Realty made its first major strategic acquisition in 2014, purchasing Telx, a leading provider of co-location data center services, which expanded Digital Realty’s services beyond large campuses into smaller, more localized facilities. In the next year, the company made a similar acquisition in Europe. “We could have built out the Telx platform in Europe, but that would have taken three or four years. By buying this platform, we were up and running immediately,” he said.

Stein said that he has long been interested in making deals, but he didn’t know the right path to get there. He had studied classics at Princeton University. “As a classics major, I had three career choices. I could teach Greek or Latin in prep school or college; I could become a minister or priest; or I could become a lawyer,” he said. He went to the University of Pittsburgh for his law degree, which eventually earned him a role at Westinghouse Credit, where he gained experience in real estate.

Stein began his business studies at the University of Pittsburgh, but transferred when Carnegie Mellon’s Graduate School of Industrial Administration announced it would begin offering a part-time option for its master’s program. He credits CMU for teaching him the importance of teamwork and transparency in leading a company

His first foray as a CEO was of a small internet startup in the early 2000s. “It didn’t amount to anything, but it’s great fun to run something, because you have all the levers at your control,” he said. “It’s an incredibly fulfilling experience, and I would recommend it to any of you that have the opportunity.” 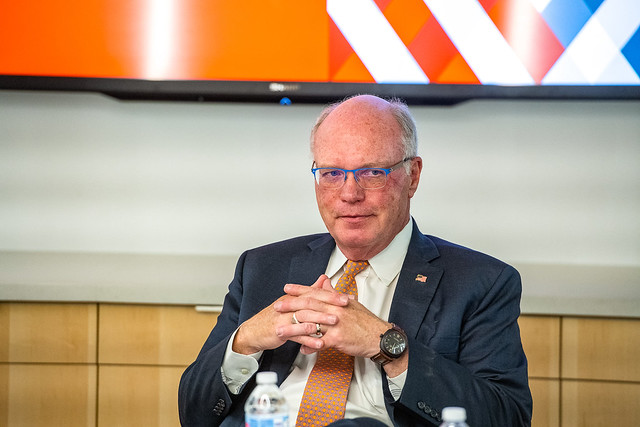