Debra Cafaro has never taken a business class in her life, but somehow, her company’s shareholders don’t seem to mind.

That’s probably because Cafaro — board chair and chief executive officer of Ventas Inc. — is the brains behind a long-term strategy that has driven Ventas’ market capitalization to $26 billion at its height, up from $200 million when she took the helm in 1999. Since Jan. 1, 2000, Ventas’ compound annual total shareholder return has exceeded 25 percent.

It’s the kind of performance that twice has landed her on Forbes Magazine’s list of the World’s 100 Most Powerful Women; on Harvard Business Review’s list of the Best-Performing CEOs in the World (one of just two women on the list); and countless other honor rolls.

But if you ask her, Cafaro will say her strategy was straightforward: grow, diversify and get into different segments.

“It was not a genius strategy,” she emphasized. “It wasn’t going to Mars, or anything like that. But it was a thoughtful strategy that was insightful, and we executed the hell out of it.”

In addition to her role at Ventas, she is a part-owner of the Pittsburgh Penguins, as well as a member of the team’s management committee — something she describes as “a dream come true” that has afforded her the opportunity to compare team management with her business experience. (And of course, there was the sweet celebration of winning back-to-back Stanley Cups, which she called “the greatest moment ever.”)

A Pittsburgh native and the daughter of first-generation Americans, Cafaro wasn’t even sure, when she was a high school student, that she was destined for college. A chance meeting with a college student in a Pittsburgh department store prompted her to start thinking about taking the SATs. It was one of many serendipitous moments that, combined with knowledge, experience and work ethic, helped shape Cafaro’s remarkable career. She ended up staying in touch with that student, who encouraged her through the college application process. Ultimately, Cafaro would end up not only going to college but also earning a law degree.

She spoke at the Tepper School of Business as part of the W.L. Mellon Speaker Series, which connects MBA students with thought leaders. Cafaro’s presentation came in the form of a fireside-chat-style conversation with Kate Barraclough, head of the MBA program and distinguished service professor of finance.

“We came into a fairly inert sector at a time when the macro was prime for consolidation,” enabling her to “really just see the power that’s in the intersection of health care and real estate and the demographics,” she said.

For example, the fastest-growing segment of the U.S. population is people who are 80 to 85 years old, she noted. She plans to learn much more about that demographic’s needs in a way that will benefit Ventas, its customers and its shareholders.

Cafaro has excelled by studying the economic environment and staying nimble, reading macro signs and reacting with the courage of conviction.

“We have changed just in advance of everybody else realizing that we had to change,” she said. For example, “We’re in a market wobble right now. Luckily, we did see it coming, and we’ve prepared for that — again, by coming off the risk spectrum.”

Toward the end of 2016 and into the beginning of 2017, a growing oversupply in the senior housing business prompted Ventas to start selling some of its assets in preparation for a financial crisis.

“You have some policymakers who are throwing economic stimulus on a late-cycle expansion and a full-wage economy with deficits,” Cafaro explained. In response, Ventas has rotated its capital to create a stronger balance sheet, focusing on university-based life science and building research and development facilities in highly rated institutions.

“We are preparing for a pretty sizeable cyclical shift,” she added.

Ventas’ board includes a sizeable percentage of women — 30 percent — earning the company recognition from the 2020 Women on Boards Gender Diversity Index and the Women’s Forum of New York. Cafaro says the reason is simple: “Diverse groups make better decisions. Diverse groups have better returns. Period. So why wouldn’t everyone want that? ... We have not diversified for diversification’s sake.”

While she acknowledged that the workplace has improved for women since she first entered it in 1983, Cafaro believes challenges remain, particularly among women in what she called the “middle part” of their careers, when many are raising young children.

“You have to really want it, and you have to make a lot of sacrifices,” she said. “It’s definitely not easy. You have to have a lot of support around you and be lucky, as well.”

There remains one foolproof way to make a list of effective CEOs, she added: achieve results, such as the returns that Ventas has enjoyed, which rank in the top 4 percent of global companies.

“That’s what people respect, and that’s what they give awards to, whether you’re a woman or a man,” she said. “That’s what you get paid for. More women should do that.” 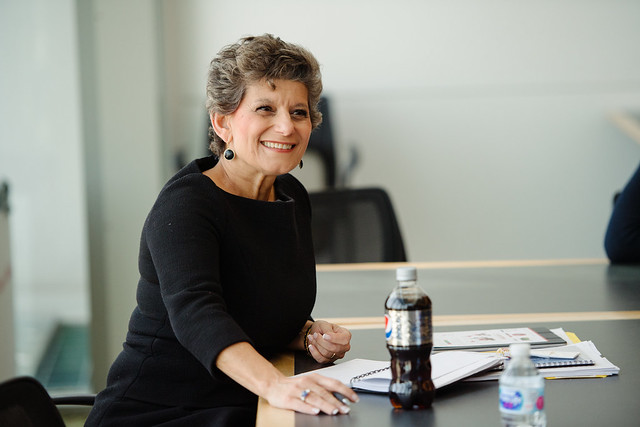