Small Retires After 40 Years of Service

A Pittsburgh native, Small enrolled in CEE as an undergraduate and was one of the first students to receive an additional major in Engineering and Public Affairs (now EPP) in 1975. After graduation, he married his wife, Mindy, and spent three “career-shaping” years consulting in water quality modeling and engineering at HydroScience Inc. before pursuing graduate and doctoral studies in environmental and water resources engineering at the University of Michigan.

Small’s research has centered around mathematical modeling of environmental systems, environmental statistics, risk assessment, and decision support. His interests have been broad, encompassing contaminant transport and related risk assessment in the atmosphere, surface waters, and the subsurface; the effects of acid rain on lakes; indoor air quality; risk assessment and drinking water standards for arsenic; strategies for contaminated site investigation and  remediation; strategies for monitoring and leak detection for geological storage of carbon dioxide; value of information; and modeling of human behavior in environmental decision making.

“Mitch’s research looked at air water and soil pollution, exchange of pollution across media, and emphasized fundamental mathematical principles common to understanding pollutant behavior regardless of media,” said M. Granger Morgan, Hamerschlag University Professor of Engineering and former head of EPP. “This all-encompassing perspective is a hallmark of Mitch’s work.”

Small has been a committed educator and mentor, teaching a range of courses in CEE and EPP including project courses and both undergraduate and graduate courses on the application of probability and statistics in engineering. His teaching also included a unique graduate course called Mathematical Modeling of Environmental Quality Systems, which provided the basis for a textbook coauthored with former students, Anu Ramaswami (now a faculty member at Princeton University) and Jana Milford (now a faculty member at University of Colorado).

Small served on the Science Advisory Board of the US Environmental Protection Agency and on nine different National Academies committees and a Fellow of the Society for Risk Analysis (SRA). He served as an associate editor for the distinguished journal Environmental Science & Technology for 16 years where he helped initiate the policy analysis section. He has received the O'Melia AEESP Distinguished Educator Award education award from the Association of Environmental Engineering and Science Professors, university and college awards for outstanding mentorship, and the Distinguished Educator Award from the SRA. He also served many years as EPP Associate Department Head for Graduate Affairs, supporting students not only in their education, but in shepherding their wellbeing and success.

“Mitch is a deeply compassionate person,” said Peter Adams, CEE/EPP Professor and Head of EPP. “During his time as Associate Department Head in EPP, he earned a reputation as a fierce advocate for the wellbeing of students.”

During his time at CMU, Small has brought cheer and camaraderie to both departments that he’s called home. He has enthusiastically shared his interests, including American folk music, as CEE Head Dave Dzombak noted in recalling a three-hour rental car ride with Small that became an “immersive tutorial” in the works of Bob Dylan.

“All of us who have worked with Mitch know his contribution to EPP and CEE extend far beyond the professional,” said Dzombak. “He has a sharp eye for the humor in life. He’s a storyteller, a poet, a songwriter, a producer of skits, and his entries to the CEE talent show are legendary.” 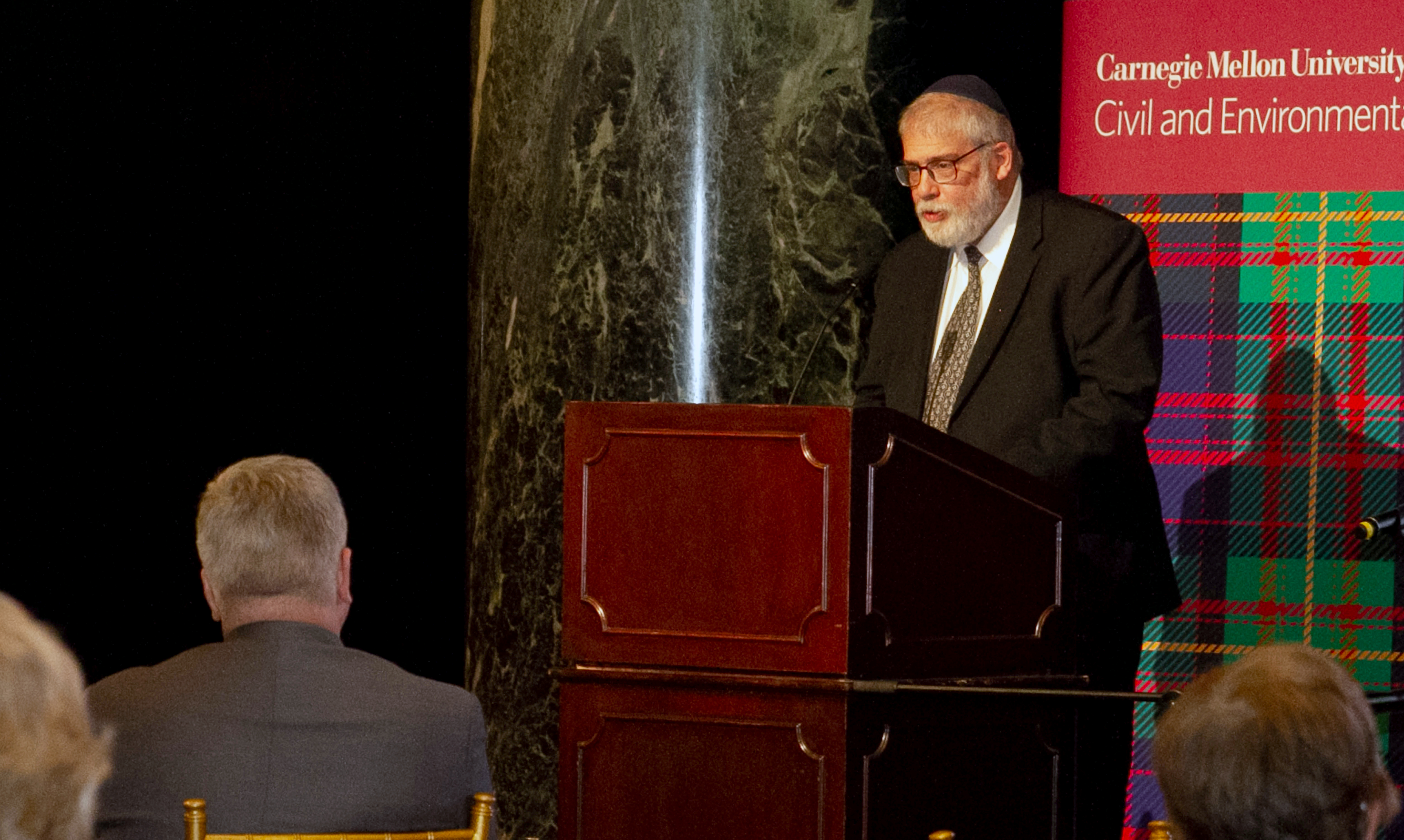 In reflecting on his own time at CMU, Small was characteristically humble, thanking his students, colleagues, co-advisers, and friends for the lessons they shared, as well as the Heinz Foundation for support for his work. He praised the departments with which he has worked for the interdisciplinary research and culture they cultivate. Though unable to thank his many colleagues in research and education, Small thanked each of the staff members of CEE and EPP personally and by name, all in one gargantuan breath.

“With this type of royal treatment, why would I even want to retire?” joked Small. “I hope in my retirement to work as hard as ever with my current students who, like my students before them, have all been the greatest of all-time. But the real reward I anticipate is more time with my dedicated wife, Mindy, and more time with our talented and kind children, many here today, our crew of grandchildren, and their great grandmother.”