After more than 35 years of service to Carnegie Mellon University, CEE Professor Emeritus Larry Cartwright (CEE ’76, ’87) has retired. During Spring Carnival weekend, many of his students, colleagues, and friends gathered to celebrate his numerous contributions to the Civil and Environmental Engineering Department.

In 1977, Cartwright began his CMU career as the manager of the Civil and Environmental Engineering Laboratories.  His propensity for teaching was immediately apparent, and he has since been the instructor for several undergraduate courses including CEE Design, Soils Lab, Materials Lab, and Design and Construction. He has been recognized more than once as an outstanding teacher, including winning CMU’s Ryan Award in 1994—an honor given to one faculty member each year for demonstrating unusual devotion and effectiveness as an instructor. In 2004 he was appointed as a full Teaching Professor, the highest honor awarded to teaching faculty at CMU.

Though he has many such accomplishments, Cartwright’s power as an educator is most evident when talking to his current and former students. Many who attended his retirement celebration commented that he has a uniquely “down to earth” way of explaining material.  “Concepts that sound extremely complicated coming from someone else make perfect sense coming from him,” says Chris Fornataro (CEE ’09 ’10).  “He teaches you more than theories.  He shows you how to use your common sense to be an engineer, not just a number cruncher.”

Often, Cartwright would pepper this engineering instruction with more important lessons about the value of hard work, integrity, and practical thinking. “I learned about life, I learned about how to put things together, and I learned about how to deal with people in a respectful way with high expectations,” says alumnus Keith Sunderman (CEE ’83), who was both Cartwright’s student and work-study employee.  “I like to think that the reason I’ve been successful is because I know what it takes to get things done—that comes from Larry Cartwright.”

These lessons have been so impactful that several alumni said that their time with Cartwright has continued to influence their professional lives.  Sarah Christian (CEE ’03), who travelled all the way from Scotland to be at the event, spent a year and a half teaching alongside Cartwright before becoming an instructor herself.  She says, “ I think of Larry almost every time I teach.  He taught me how to ask the students questions to push them farther. I have tried to incorporate that into my own teaching.”

Cartwright has been a mentor and a friend to countless students over the years, and his generosity is a recurrent theme in their stories. For example, Bobbi Marstellar (CEE ‘93), who is affectionately described as Cartwright’s “daughter,” explains how he supported her after her father passed away during her junior year of college.  “He’s been good to me, really and truly better than my biological father ever was.”

True to character, after being presented with several mementos at his retirement party, Cartwright humbly commented that he’d simply done his best. Judging by the full room and the many heartfelt memories, Cartwright’s best has been nothing short of exceptional. He exemplifies the Carnegie Mellon University spirit—his heart is truly in his work. 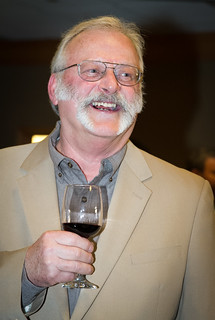 Even more exciting, once the fund reaches 1 million dollars it becomes a full Teaching Professorship—the first Professorship for teaching faculty ever at CMU.